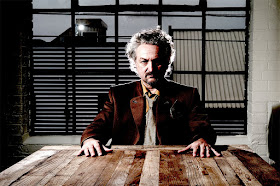 On a recent Facebook post, Fernando Viciconte faces the camera, Green Card in hand:  Got my Green Card today! Next step will be becoming a U.S. Citizen so I can help vote Trump out of office!  Born in Argentina, Viciconte followed his family to the Los Angeles area as a very small child, living undocumented until age 12.  He relocated to Portland as a young man, where he earned a reputation behind an eclectic and uncompromising strain of rock.

I first came across Fernando back in 1997 when I was purchasing music for a bookstore in Oregon.  Hoping to add some local music to our collection, I pulled in his Widows record, a dark and challenging roots-oriented collection I begged customers to purchase until it appeared on the store's bestseller list.  Subsequent years found him exploring the range of his artistry, incorporating elements of Latin, rock, psychedelia and blues, never especially catching fire beyond his Northwest base, but eventually earning a 2016 induction into the Oregon Music Hall of Fame.

While comparisons could be made to Alejandro Escovedo, Adam Faucett or Scott McCaughey, Fernando's sound is his own, a guitar-driven rock hybrid that never gives ground to trends, never takes the easy road to our ears.  Medical challenges have slowed his output in recent years, his last project being 2015's excellent collaboration with Peter Buck, Leave the Radio On.  Viciconte has always been a collaborator, surrounding himself regularly with other Rose City denizens like Paul Brainard, Mike Coykendall, Scott McCaughey and Lewi Longmire, Another steady presence throughout his work has been Luther Russell, a fellow overlooked treasure (you'll want to track down his Medium Cool release from back in February; Russell calls it a rough rock & roll album roughly about rock & roll).

Viciconte reports how he and Russell were originally drawn together around their mutual appreciation for the Sir Douglas Quintet, doo-wop and Richie Valens.  The two met recently at Russell's four-track Mirage Garage studio to pound out Traitors Table (Fluff & Gravy, June 21) in just under a week, an exception for Fernando, who is known to take his time assembling records.  The resulting 10 songs still bear the imprint of Fernando, but mark the artist's most immediate, unadulterated shot of rock to date.

Traitors Table is also a very personal project, coaxing together aspects of Viciconte's own immigrant story as a dreamer and a concerned bystander with something to say about the state of our dis-union.  He writes:  The world was bleeding.  Profusely.  And it looked as though this well-meaning country was about to dodge a hollow-point bullet aimed for our collective soul.  Then we didn't.  Rather than composing a diatribe or airing a laundry list of his grievances, Fernando created his new record to be a tableau of sorts, an SOS lifting the voices of all parties onto the airwaves.  It's a project that shows compassion to those trapped in the immigration wars as well as those looking for a way out of the cycle of poverty.  Traitors Table points fingers only where it's merited.

The parameters are established on the CD's drum-heavy opener, "Division Lines".  Throughout Traitors Table, songs are attributed to both Viciconte and Russell, with the pair responsible for all the record's noise.  Tribal percussion powers the song, generating an immediate aggression:  A cockfight amongst the pawns / Unity viewed as a crime.  Fernando spits the lyrics of "No Deal", another heavier cut that portrays a nation engaged in battle:  The lying empty word / Now the fate of the earth is sealed / The armies are gathering / Serving a wicked king / So kneel.  Both contributors are capable of generating fireworks with their guitars, and they stir up an unholy storm of noise and conflict on several songs.

On each of his records, Fernando creates room for a couple tracks that come from a more melodic place.  "The Company" is a piano pop cut, warning younger generations against complacency and cynicism.  He asks, Do you blame your parents for the mess they've made / For the debt that's not yet been paid / Enslaved to the Company / Is it time to break free.  While some songs hail from other perspectives, the songwriter tells his own story on "I Don't Know".  It's one of the year's most worthy songs, with retro programmed drums, rubberband bass and heart stirring guitar.  Viciconte sings movingly about a search for identity, a need for deeper belonging:  I couldn't speak the language / So I started to sing / Guess I needed the attention / All the love that it brings / I don't know who I am.

While his earliest releases favored more of a roots vibe, those tendencies have receded until they appear just as shades of Fernando's overall musical message.  Echoes of twang surface primarily on "Hey Darlene", portraying a couple desperate for change who cast their lot with what they see as a lesser evil.  Chiming Byrds-like guitars hold court: Hey Darlene / Have you seen the places where the rich people go / The ones in the know / I can't wait / Til we fill our plate.  It's a perspective that pulls back the covers on the writers' compassion, avoiding the all-too-common black 'n white blame game.  Which isn't to say that peace and understanding are the prevailing forces on Traitors Table.  There is a punk spirit throughout, tempered with a strain of pop psychedelia especially on the biting "Longest Wait", where Viciconte channels his inner Paul Westerberg.

Traitors Table takes admirable care to represent a myriad of voices from the fray, even ones that come across as fringe.  What makes this Fernando's most resonant record, however, is that it's ultimately driven by the artist's own story, the boy from Argentina growing up in America without an invitation to the table.  The album closes with "Turned Away", an acoustic strummer that slips without warning into angry mayhem:  They say that every dog will have his day / Now they're chasing you away / As if you were a stray / Turned away for now.  It's a sobering reflection from one of the year's strongest releases, a collection that reminds us that Fernando Viciconte belongs alongside Alejandro Escovedo as among our most eloquent spokespersons for encouraging a long memory, keeping mindful of both our diverse origins and our collective fate.

Every month we hazard a glance over our shoulders at what's been brought to the table over the past couple weeks.  We call it:

WHAT's SO GREAT ABOUT MAY?!!

It's what resonated most during the month of May, shared in order of appearance.  For a fuller account of what happened, what's happening and what's gonna happen, you'll want to check out A Routes & Branches Guide To Feeding Your Monster.  Here's our weekly playlist, the songs for which can be streamed by connecting with us on Spotify.


Some weeks are diamonds, some not so much.  With regards to new addition to our Release Calendar, the past several days were generous, including announcements from Dalton Domino, Dori Freeman and proto-soul guy Jeb Loy Nichols.  Country rockers I See Hawks in LA are raising funds for the June release of a collaboration with Brit folk duo Good Intentions, and Joe Pug promises a July 19 date for his return to the fray, Flood in Color.  The Busiest Man in Roots Music, Rod Picott has released a couple albums, some poetry, a short story collection and screenplay over the past three years.  Now he sets his sights for the most intimate recording I've made - expect a July 19 release for Tell the Truth and Shame the Devil.  Jesse Malin has tapped good friend Lucinda Williams to produce Sunset Kids, due at the close of August, and we're officially looking forward to Have Gun Will Travel's latest, Strange Chemistry.  Here's this week's ROUTES-cast:

> ROUTES-casts from 2019 have been removed; subscribe to our Spotify page to keep up with all our new playlists!
Share