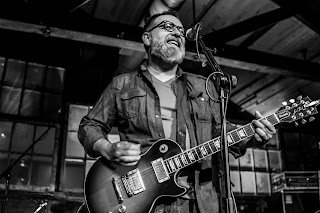 Standing outside their tour van on the verge of departing for the road, Mic Harrison & the High Score resemble some scruffy fellows who have shown up to move your furniture.  That's the first good sign.  There's also the fact that Harrison launched his career as part of the short-lived but iconic alt.country outfit the V-Roys with Scott Miller, as well as serving with Superdrag.  After a stint as a solo guy, Harrison gathered musical forces with guitarist Robbie Trosper under the present moniker, releasing a slate of quality alt.country LPs to positive critical acclaim (though they'd still have no problem showing up for your couch without attracting the neighbors' attention).

The band's new release, Vanishing South, trades in a strain of alt.country that's more common on the stages of small town dives than on your favorite radio station or on the shelves of that great record store that doesn't really exist anymore.  Think Bottle Rockets.  Blue Mountain. Maybe some of the rootsier dBs?  A Mic Harrison & the High Score number is constructed from the guitar out, never more busy than necessary, but always smarter than you'd expect.

"Salt Stained Road" is an instant groover, fueled by a heavy stomp and an indelible guitar grind.  It's music that bears the dark brand of its Knoxville home, where punk roots run as deep as country.  The album opener strikes such an immediate and familiar chord, putting the ears at ease and welcoming home the heart that thrives on the sound.

"Woman" owes a debt to Knoxville's R&B heritage, from the cry in Trosper's guitar to lyric lines like, I'm addicted to your mercy / You make a better man come around.  The song is shot thru with a Southern Rock 'n Soul pedigree, elastic guitars that might've been recorded a lifetime ago and a solo that unspools like a classic.

"Never Be This Way Again" adds a dash of Brit rock a'la Nick Lowe, a quality that added greatly to the V-Roys' poppish appeal.  It's a song that also reminds us of Mic Harrison's versatility as a singer.  Here, he channels Bob Mould's most tuneful moments.  Pieces like "Home" or "Warm Winter Day" take a more gruff, alt.country line.

There's no escaping the voices and the places and the sounds of the region, nowhere more evident that on the titular cut, "Vanishing South":  I'm losing my place here / Every mile that goes by / Vanishing South, where did you go / Vanishing South, I hardly do know you know.  Where Patterson Hood surveys his homeland from its underbelly, and other writers might romanticize and embrace the South's plentiful stereotypes, Mic Harrison's tunes are written from a front porch perspective, taking in the comforts and the challenges of home, family, work and place.

Those looking to sidestep "thoughtful" in favor of "just plain fun" might want to lower the needle on "Indiana Drag Race", or the record's fiery instrumental, "Murder Surf".  Think a less self-parodying take on Southern Culture on the Skids or a multi-dimensional Los Straitjackets.  Mic Harrison & the High Score is composed of roadhouse veterans and longtime collaborators who know the pocket and how to use it.  On Vanishing South they explore another endangered territory, the lonely and windswept crossroads between alt.country, punk, R&B and journeyman pub rock.

So, this week I tripped across a couple things that stuck in my mind for about the same reason.  First, an online something-or-other published a list of the "10 Lamest Americana Acts" that I won't honor with even a link.  Short answer: It's pure clickbait written by a guy with some pedigree who's mistaking taste for fact (an online epidemic at least partly responsible for endangering the tradition of musical discovery).  Next, a promoter and former broadcaster whose work I value and respect joked in passing about the preponderance of glowing reviews for americana records.  No harm necessarily done there, but together those comments sunk a bit of a nail into my thoughts, as a man who's been accused of having too many favorite records for one guy.  Fact is, I have just enough bandwidth to produce one broadcast and one original review per week (and sometimes even that's a challenge).  If I'm going to air my thoughts on one release per week, my time is better spent sharing a positive musical experience rather than ripping an artist whose stuff doesn't resonate with me.  Discerning listeners will recognize that there are many high and mid-profile americana projects that I choose not to represent on R&B.  I'll remind folks again that my job here is not to serve as an arbiter of what's "good" and what's "lame", but to share my musical vision by shining a light on sounds that resonate with me.  Sure, I can be plenty judgmental, and I never shy away from irreverence.  If I'm not vigilant about checking my email, that inbox will overflow with stuff about which I could write not entirely positive reviews.  But nah, that's not my job.  I picture myself walking over this towering mountain of stones with others who care about our kind of music.  When something catches my eye, I might call, "Hey, look at this one!"  But most of the mountain is composed of stuff that just looks like plain old rocks.  Others are at the foot of the pile, lovingly polishing their collection of gems - the same ones that they've been admiring for years and years.  For me, the joy lies neither in poring over those old favorites or in focusing on how average this or that stone is.  On Routes & Branches, it's about unearthing those brilliant gems and letting them shine.