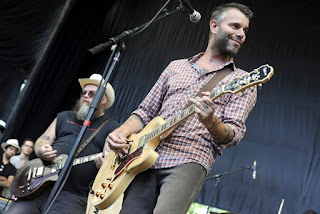 I could go off on at least a couple new releases for this week's Episode.  The Best Lyric Ever this week hails from Portland's Drunken Prayer, who promises, "When you get to heaven / God gives you balloons / You lost when you were alive".  Also great to provide a radio home for Otis Gibbs' new album, which takes a decided turn from his typical union-rallying social justice theme.  Locally, Bad Weather California sound like nothing else happening right now, weaving together aspects of sun-bleached country, indie rock and garage psychedelia for an album that I've returned to a couple times already.

Nevertheless, I'll save this Episode's  prime real estate for the return of Lucero, who continue their great experiment toward listenability begun two albums ago.  Horns and keys aside, Ben Nichols has become an excellent writer, a master in his mythology of late night bars, inescapable hometowns and dead end girlfriends.  Lucero have also become on of the tighter alt.country bands, tempered by seemingly nonstop touring.  While I'll always harbor a soft spot for the bombast and edge of the band's early material, they've taken impressive steps towards the dreaded "M" word (maturity!) with every album since 2006's Rebels Rogues & Sworn Brothers.  Despite the fact that iTunes still files them under Latin ...