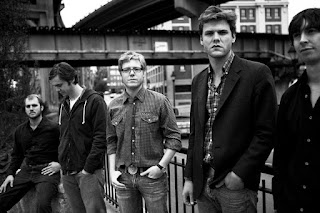 First things, I'll be chatting with Darrell Scott this week, and hope to piece everything together to play on the March 17 Episode.  Darrell's work has been nothing but phenomenal over the past few years, including his time with Robert Plant's band and his stellar new Long Ride Home album.  I look forward to my brush with greatness.

Speaking of greatness, I'm officially declaring the new Sons Of Bill album one that everybody should wave over their heads in victory like a flag of so many bright and inspiring colors.  Or just go buy it.  Like Reckless Kelly or Cody Canada, Sons Of Bill's Sirens is red dirt music that surpasses the confines of the genre with incredibly hook-laden songs, fierce playing and excellent singing.  "Broken Bottles" from their One Town Away landed near the top of that year's favorites list, and I would expect no less for the new album's opener, "Santa Ana Winds".  Especially because nothing says alt.country like a William Faulkner sound bite ...  If you can't wait for me to play through the album on  R&B, head over to the Sons Of Bill website to hear more.

Other flags to wave this week include an alternately wonderful and curious project from Lone Justice cofounder Marvin Etzioni, where he plays with Steve Earle, John Doe, Buddy Miller and Maria McKee (yes, I vote for a Lone Justice reunion).  Then he unleashes the casio keyboard for some ultra lo-fi bits.  Also, looking forward to digging further into Wrinkle Neck Mules' promising Apprentice To Ghosts, which could be a breakthrough for the Virginia band.  Finally, extra points for Lee Bains III & the Glory Fires for the best album title of the year in There Is a Bomb In Gilead.  Oh, and finally too, I prefer my Ray Wylie Hubbard loud and deranged.