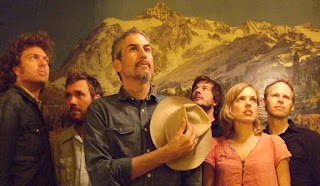 
As mentioned previously, I don't do a lot of "gimmick" or theme shows.  I've done an alphabet show, a covers show, a tribute show featuring Townes Van Zandt and TVZ covers, as well as favorites shows and holiday episodes ... and that might be it during my decade-plus radio stint.   Next Episode, I'll add one more to my list with a program highlighting the 100th birthday of Woody Guthrie.  I'm truly not a folk music guy, so plans are to pull stuff together from americana and alt.country artists - covers of tunes from throughout the life of Mr Guthrie, as well as folks setting his unpublished lyrics to new music.  This will happen during the second hours of R&B, so please tell a friend, post on your social media hoo-has, and such.  I'm looking forward to presenting this hour.

This Episode, we begin to dip into an absurdly generous collection released by Ryan Adams.  Live After Deaf features 174 tracks, recorded during last year's European tour.  This followed a relatively passive period while Adams dealt with complications from meniere's disease, which threatened his hearing.  While impatient listeners might long for a full band, these live solo acoustic cuts remind us that Adams is a fine guitarist and a stellar songwriter. The day it was released, Amazon had the full digital set for less than $10.00, which I imagine was a goof since it quickly resorted to its standard price of $108.49.

Finally, for weeks I've been toting around a copy of Giant Sand's new Tucson album.  Howe Gelb's music falls into that category of stuff I love, but which I seldom play on air.  This group would include the likes of J Tillman, Josh T Pearson, Sun Kil Moon, etc.  While I consider Giant Sand to be the epitome of americana music, others might regard it as a mutant strain (one reviewer calls them, "the Flaming Lips, if they had gotten into Western swing and mariachi music").  Now Gelb's new "Country Rock Opera" is very accessible as Giant Sand music goes.  Gelb is still a barely passable singer, and his songs are nothing if unconventional, but for Tucson he brings together folks from all over who have played in the Giant Sand community over the years.  For years I have found Giant Sand's music beautiful in a dusty, desert kind of way.  For the next couple weeks, I vow to finally share this fondness with R&B listeners.  That's my intention at least ...