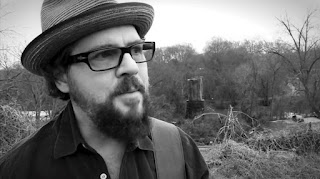 Patterson Hood isn't even necessarily my favorite Drive-By Trucker.  I've always been more of a Mike Cooley guy, even preferring Jason Isbell's work to Hood's.  The admiration was there, though.  2009's Murdering Oscar (and other love songs) landed that year on my 20 favorite albums list, despite the fact that it was a somewhat uneven effort.  It's just that for every great Patterson Hood DBT tune, there was another where I felt he tried a bit hard to be dark and gritty.  More recent albums have seen his writing relax a bit, still focused on the down and out, but less cartoonish, more nuanced.  That trend is realized on his third solo work, the stellar Heat Lightning Rumbles In the Distance, which offers Hood's most poetic, diverse material to date.  Our first glimpse into the album came with one of two Kelly Hogan collaborations, the heartbreaking ode to Vic Chesnutt, "Come Back Little Star".  As she does so consistently, Hogan's voice works wonders alongside Hood's flawed croak.  DBT members crop up throughout a record that boasts more careful arrangements than we've seen from Hood's previous work.  Like all of his songs, these are character-driven pieces, so haunted and steeped in the mythology of the South that it's not hard to imagine that Heat Lightning reportedly began as a semi-autobiographical novel.  From the title track, "Heat lightning rumbles in the distance / The sun's falling west of the trees / The old oak's gone and the house is falling down / But the ghosts are a comfort to me ..."