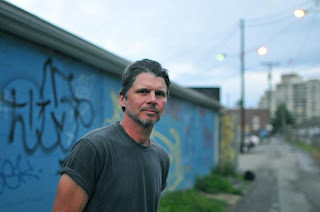 There is something genuine about Chris Knight's alt.country.  His songs speak of hard luck and old trucks, sung in a gruff voice that falls between John(ny Cougar) Mellencamp and Robert Earl Keen on the spectrum.  In one song, he calls himself, "a bring it on, get 'er done, don't run SOB", a sentiment that you can imagine spouting from any of a dozen mainstream country sorts.  Thing is, while these hats go back to big houses and big paychecks, Chris Knight may be going back to his trailer.  Again, a genuine sort.  He is among the strongest alt.country songwriters, but doesn't garner near the praise of flashier types with half his talent.  Not typically one to hobnob, Knight's 8th album features guest spots from John Prine, Buddy Miller, Dan Baird, Tammy Rogers and more.

Thanks to all who contributed during this Episode's fundraising opportunity.  Thanks, too to all who followed suit throughout the week.  Since KRFC's drive draws to a close Saturday evening at 8, you'll still have a chance to support R&B on Saturday, 9/22.  Call us at (970)221-5075, or pledge online at krfcfm.org.