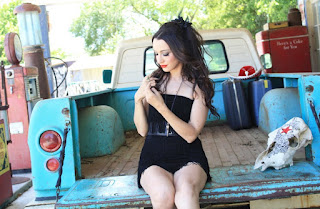 That's right.  Snow this week here in Northern Colorado.  We'll huddle down and do our best to pretend Fall actually happened this year.  It's just another reminder for me that the year's end is pending, that we're slouching toward that time when I hole up to decide my favorite albums and songs of 2012.  I'll choose a couple dates in the next week or two for these respective programs.  This year, I believe I'll debut my favorite Colorado music list on my Thursday Morning Mix program some week.  More news to come on this.

Lest you think that anything on my year end list was already released earlier in 2012, I give you Lindi Ortega as evidence that great new music is being made everyday.  The Canadian sparkplug's 2011 album, Little Red Boots, was certainly one of the notable debuts of the year, and set high expectations for Ortega's sophomore effort.  Produced by north-of-the-border guitar legend Colin Linden, Cigarettes & Truckstops is a darker, more mature record (as evidenced by titles like "Murder of Crows" "Use Me" and "Day You Die").  Ortega's cowgirl look and her sweet, Kasey Chambers-like chirp of a voice might mislead listeners to think otherwise, but there is a lot more depth to her songwriting than you might find in other pretty voices.  Her neo-rockabilly and honky tonk rhythms are infections, and certainly strong enough to vie for a prime spot in my list.

Finally, I'm really enjoying our new original content here, Routes & Branches Departures.  Misters Fauss and Andrews have already gotten us off to a great start, and I have two more postings waiting in the wings for later this week.  By all means, stay tuned!