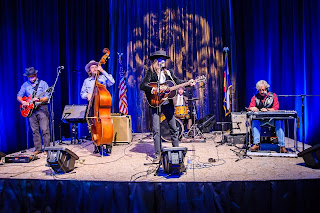 KRFC airs a locally syndicated program called "The Colorado Sound".  It's quite a wide-ranging show, reaching from old and forgotten rock acts to current EDM and hip-hop hailing from Our Faire State.  No matter how wide a swath host Chris K cuts, for my part "the Colorado sound" sounds like Halden Wofford & the Hi Beams.  And it won't be too much longer before the rest of the nation gets a good strong taste of their Rocky Mountain Honky Tonk.

The group's third studio album is a spot-on blend of all the elements that make their music so perfect for Routes & Branches: Impressive playing that's just this side of a mess; vocals that sound vaguely threatening; a sharp and irreverent sense of humor that skillfully treads the line between smart self-parody and stereotype.  Wofford & co. can launch a near-novelty romp like "Beaver Hat Boogie", then present a tight, classic honky tonk piece about an unrepentant gambler in "Loser".  There's an ode to "Pretty Boy Floyd" and a beautifully unhinged "Brown Mountain Slave" that rages from throat-shredding vocals to sweet yodeling on a tune seemingly about ... well, an appeal to marital incarceration in the sticks.

I play my fare share of Colorado music on R&B.  Heck, Fort Collins' Arliss Nancy produced my very favorite album from 2012.  Even if Mr K does a wonderful job in demonstrating the diversity of Square State music, I think we'd all agree that "the Colorado sound" probably doesn't sound much like the "electrohiphopsoul" of Pretty Lights, or even the "folk/rock/alternative" of Churchill.  No, our sound is heard in the unabashed backwoods blues 'n boogie of Musketeer Gripweed.  Or the gloriously unhinged gospel of Slim Cessna's Auto Club.  And especially the Rocky Mountain Honky Tonk of Halden Wofford & the Hi Beams.