Such a great show this week, in addition to the Choice City Stomp going on in Fort Collins.  One of my favorite songwriters, Michael Dean Damron, joined us in studio for a good long chat and a couple live cuts.  Other than the music, my favorite moment was talking to Mike about his passion for Thin Lizzy, one of my favorite bands back when I was just a little dj.  I'm kicking myself that I didn't ask him to play a couple bars of "Cowboy Song" ...  Oh well.  Mike hopes to bring the entire I Can Lick Any SOB band into our studios during a tour later this year. 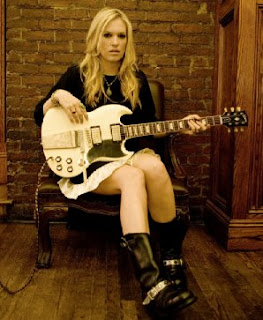 Also on this Episode, a new release by another Portland songwriter, Ashleigh Flynn.  While I've generally considered Ashleigh more of a contemporary folk artist, her Million Stars takes her in a decidedly americana direction.  And it's been several years since we were able to present anything new from Mesquite, Texas artist Kimberly M'Carver.  Such a good writer, in the great tradition of artists like Nanci Griffith.

Finally, I have to stop down and say what a surprise and a bold step forward for another of this week's debuting artists.  Last we heard from Nashville's Greta Gaines ('08's Whiskey Thoughts), she played a tough but traditional brand of good natured bar band honky tonk/alt.country.  On Lighthouse & the Impossible Love, her electric guitar is both more confident and more reckless, and her music comes off like Aimee Mann if she were to add a dash more soul and perhaps hang out a bit more in roadside diners.  The songs are smart, but never in a hurry to be clever or easily categorizable.  Her promo material mentions that, by the way, Gaines has also been a professional snowboarder and fly-fisherman (and her father wrote Pumping Iron and invented paintball).  As far as I'm concerned, listening to the maelstrom guitar on "Good Side", she finds her real calling on the six-string.  Gaines calls this 5th album, "the sound that I've been chasing".  Me too.