It's just unfortunate that sometimes the best conversations happen when the mic is off.  Hope you had a chance to at least hear the parts with the mic on during our visit with Bonnie Whitmore.  She has such a wild voice, and since she's been playing around since she was just 15, she has an unexpected arsenal of road stories that could take an entire episode to relate.  I also hope you had a chance to catch Holly Williams' visit with Charlie on Friday afternoon.  It was especially charming that Holly asked if she could buy Charlie's copy of her granddad's record to play in the car. 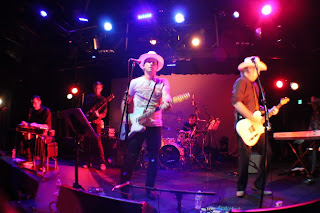 I've been on the airwaves in various guises for about a dozen years, but I've never played a Foo Fighter's tune.  It's not for lack of respect, since I feel Dave Grohl & co are one of the last true rock-n-roll bands around.  I did get one step closer this week, however, in airing the side project from Foo-tarist Chris Shifflet & the Dead Peasants, All Hat & No Cattle.  Sometimes these rock-to-country departures come across as throwaway efforts from folks who don't quite understand the roots half of the equation.  To his credit, however, Shifflet populates his second album with names like Buck, Hag and Waylon, tunes that are being played every weekend at honkytonks throughout the country.  Shifflet and his band dirtied up these songs with months of road dust, touring them around the country, then committed all but vox and steel to tape live in studio.  All Hat still sounds like a rock band playing honky tonk and country, but sometimes that's just the thing for a certain sort of evening (or even an overcast Sunday morning in the coffee shop).

Also on this Episode, the unreal vocals of the quiet girls from high school, the Carper Family.  Also, a cursory glimpse into the much-anticipated Big Label debut from Austin Lucas.  And the welcome return of the the just-off-center cosmic country of I See Hawks in LA.