Call it the Art Garfunkel syndrome:  the louder the music, the nicer the artist.  Micah, Shane and Murphy couldn't have been better behaved during the Two Cow Garage visit to R&B last week.  In addition to making a spot-on pitch for community radio during our seasonal membership drive, they signed CDs and a poster to use as premiums.  Oh.  And their music was peerless. 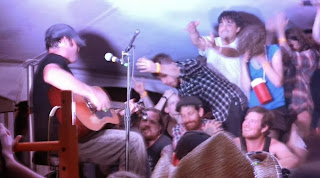 I've heard that Konrad Wert is another nice guy.  Heck, he recently received an award for his work as an elementary teacher in Florida.  Under the moniker Possessed By Paul James, Wert will release the tremendous There Will Be Nights When I'm Lonely late this month on Hillgrass Bluebilly Records.  I read a book years ago by Dennis Covington called Salvation on Sand Mountain.  It described the curious practice of "snake handling" in the churches of Southern Appalachia.  PPJ walks the knife edge between salvation and damnation, practically speaking in tongues on "40 Days & 40 Nights" and the positively possessed "Soy Muriendo".  Beneath refreshingly spare production, Wert's soul is laid bare on the title track, where he accompanies his unhinged vocals with only a strummed violin and a heavy boot.  Conversely, the more lighthearted "38 Year Old Cocktail Waitress" allows PPJ the full band treatment, including the ubiquitous Lloyd Maines on pedal steel.  Like the snake handlers, there is a recklessness to the songs on There Will Be Nights, in clear sight of both damnation and salvation, but fully alive.

Many thanks Routes and Branches!