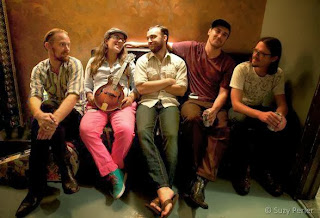 Between three jobs, a family and a nasty reading  habit, you'd think I might have better things to do.  Nope, I spend far too much of my time griping about bad band names.  For every Drag the River or Bottle Rockets, there's bound to be a Fruition.  Fine band, don't get me wrong.  There's a soulfulness to their Just One of Them Nights that you'll only find on Band of Heathens or Wood Brothers (good band names), or in Greensky Bluegrass (with whom they just spent some quality tour time).  Three vocalists assure a good deal of variety from song to song, with Mimi Naja bringing the album's most refreshing sounds to tunes like "Whippoorwill" or "The Wanter", and Naja's mandolin also lies at the heart of Fruition's very comfortable acoustic blend.  Using Portland, OR as their musical hub, the quintet came together through busking and hard touring.  The resulting sound benefits from that camaraderie, where the individual members build around one another and gradually coalesce into a more natural whole that sounds simultaneously tight and loose.  Owing to songs like the driving "Boil Over" or the sweet and soulful title track, I've been able to forgive Fruition their questionable choice of moniker.