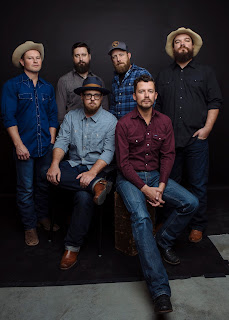 Give Evan Felker four or five minutes and he'll sing you a story.  Give his band, Turnpike Troubadours a couple hours and they'll rock an audience harder than almost any other country act.  Their new collection, Long Way From Your Heart, is the sound of a tight, road-honed outfit taking that energy and professionalism into the studio for a watermark record.

Long Way arrives in the wake of a trio of releases that began with promise (2010's Diamonds & Gasoline, 2012's Goodbye Normal Street) and found realization with 2015's self-titled CD.  Most remarkably, Evan Felker has woven throughout these songs the stories of people and places that surface from one album to another.  Like the young family walking through the smoke of the opener, "Housefire", finding an ironic freedom in the loss.

Turnpike Troubadours' songs are constructed from sturdy levels of sound, and the listener is never far from the sharp hook of a melodic moment.  Fiddle shines in the fore of nearly every song.  In the absence of fiddle there's harmonica or there's the nourishing buzz of electric guitar, or the band's newly increased commitment to pedal steel.  "Pipe Bomb Dream" and "Something To Hold On To" are steady red dirt powerhouses, while "Winding Stair Mountain Blues" arrives with a tinge of 'grass like a harder hitting Trampled By Turtles.

"Tornado Warning" might bring to mind Robert Earl Keen, while edgier moments honor the tradition of James McMurtry.  And Felker brings in cowriters like Jamie Lin Wilson, Kev Russell, Jonny Burke and John Fullbright for good measure.  But the Troubadours' most effective magic lies in their identity as a collective.  Both "Oklahoma Stars" and "Sunday Morning Paper" show more patience and maturity than anything on the band's previous releases.  The latter begins as a fingerpicked folker, before it unspools into a honky tonk revival, a heartfelt tribute to an unnamed musical hero.

"Old Time Feeling (Like Before)" may be Long Way's musical high point, offering both an imminently singable chorus and a really sweet pedal steel line.  Well I'm the same old me you know / Fucking up the status quo / Trouble all the way up to my neck.  Perhaps you don't turn to bands like Turnpike Troubadours in search of answers to life's bigger questions.  But where Isbell mines for meaning and Stapleton explores the country music archives, and while Sturgill pushes the boundaries, this band simply offers a good time well played.

Also this week, we learn that "Mapache" means "raccoon" in Spanish.  And that the California country-folk duo is exploring new strains of mellow on their full length debut.  It dawns on us that Ronnie Fauss just gets stronger as a writer, and that there is righteousness in the rough punk blues of a man with the middle name Porkchop.  And let's say that we'll plan our year-end favorite albums list for debut on the week of November 26.  'Kay?