To these ears, there's little that's more satisfying than the sound of early alt.country.  Bands that were insurgent country or cowpunk or no depression before it was really a thing.  Thinking Uncle Tupelo and Whiskeytown and Slobberbone and Blue Mountain and Freakwater.  But even before some of those, there was 6 String Drag.  In the true spirit of insurgency, they even had a part-time trombonist.  Fronted by Kenny Roby and Rob Keller, the outfit released just a couple records before dissolving in the late 90s.  The second of those albums, 1997's High Hat, has been given the 20th Anniversary treatment and reissued by North Carolina's revered Schoolkids Records. 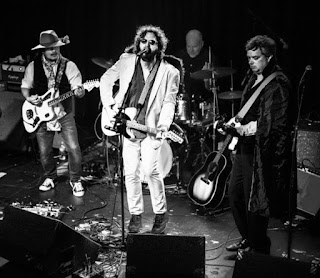 That sweet hybrid country sound pervades every corner of High Hat, which was co-produced by Steve Earle and Ray Kennedy.  The iconic "Bottle of Blues" would merit a spot on any playlist of alt.country essentials, and it sounds as fresh as ever in its remastered format.  Hell, this entire record is an essential, with cut after cut triggering those memories.  The horns and boozy vocals of blues buster "Gasoline Maybelline" contrast with the more literate heartland rock of "Cold Steel Brace".  File "Top of the Mountain" alongside Jason Ringenberg's scorching punk-fueled country, pushed to its limits on the perfectly brief guitar tear "85 on 85".  "Ghost", "Keep on Pushin'" - it's the sound of a musical movement being born.  Then it was over as quickly as it sparked to life.

Kenny Roby reconvened 6 String Drag in 2015, releasing Roots Rock 'n' Roll, a perfectly fine project with a handful of songs that rekindled those old sentiments - "Kingdom of Getting It Wrong", "Hard Times, High Times" and "I Miss the Drive-in" come to mind.  What many fans missed was that Roby had recorded a couple solo collections in the interim years, records that witnessed an impressive evolution and a maturation of his songwriting palette.  Completists will especially want to track down the unfortunately overlooked Memories & Birds from 2013.

This is an important chapter to the 6 String Drag story, since it helps explain what we're hearing on the group's brand new Top of the World.  While the band's early stuff is tremendous and feeds a certain part of the soul, these new songs might mark the first time we've heard Roby fully incorporating the sonic possibilities of his solo journey into his band material.

Of course, for those eager to be set up with another shot of early alt.country, there are fierce moments like "Small Town Punks".  There are few vocalists more capable of pumping it up than Kenny Roby, sounding as much like Craig Finn as Elvis Costello as he spits the song's lyrics like that young man who began 6 String Drag half a lifetime ago.  And much of the underappreciated pop spirit that ripped through those early cuts drives short sharp shots like "Never Turn My Back On You Again" or the effortless barroom romp of "Robert & Lucy".  See also the spirited "I Wish You Would", a good-natured bounce held aloft by a healthy dose of skronky horns.

It's great stuff, and such a perfect way to welcome in the new year in music.  But for me the revelation of Top of the World lies in the songs that aren't immediately familiar, pieces that owe more to Kenny Roby as a solo artist than anything either insurgent or country.  "Top of the World" is a simple, simply gorgeous ballad, showcasing the singer's restrained vocals over a fingerpicked acoustic.  An instrumental break is built around a wave of strings and a toy piano, sounding more like Brian Wilson's lovingly constructed pop symphonies than Jason & the Scorchers' barstool burners.  "Jennifer Wren & the Crow I Know" is another inescapably melodic moment, with a chorus featuring bluesy horns and a guitar solo that reconnects it all to 6 String Drag: The Early Days.

The bottom line here is that Top of the World is more than a simple blast from the genre's past.  Much more than their 2015 rebirth, their new record announces that 6 String Drag are a contemporary band, creating relevant music and evolving in interesting ways.

Also on this Episode, please join us in recognizing that Courtney Marie Andrews' forthcoming CD might be the very best thing on the horizon besides Spring: The Season.  Also, we'll celebrate the promise of Great Peacock's eagerly awaited (by me) new project, and we get to play Mountain Goats.  I'll mention here a well the Episode's best moment:  About halfway through Shovels & Rope's collaboration with Matthew Logan Vasquez, there is the crackle of a guitar coming to life, like a treefall disrupting a quiet forest.