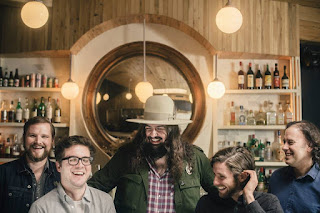 Early last year, National Reserve made available a free download capturing a New Year's Eve concert they had performed at the close of 2016.  The set is notable for a couple reasons.  First, it reveals what a fiercely energetic live band they can be.  Also, with covers of tunes by Blaze Foley, JJ Cale, the Stones and more, Live Volume One speaks to the influences that have converged to create such a beast.  Like Banditos or Low Cut Connie or the amazing Texas Gentlemen, there is a sense that National Reserve can do about anything to which they put their mind.

After several years of workmanlike live performance and a couple EPs, National Reserve are ready for their full-length debut.  Motel la Grange (Ramseur, May 11) is the sum of all those parts, from Memphis rock 'n soul to Texas blues, Nashville twang to good old New York rock 'n roll ...  In other words, they're a hell of a bar band.

"No More" constructs a wall of guitar fuzz, spiked with organ.  Sean Walsh's vocals are key to the band's vibe, abrasive but tuneful, energetic but seemingly effortless.  National Reserve make some great noise, but their sound is never messy and every element plays its part.

The band sites The Band as a compass, an influence you'll hear on "Don't Be Unkind" and "Other Side of Love".  The Band were rightly celebrated for their wide ranging musical reach, all masterful instrumentalists who recognized the value of playing loose and free.  Likewise, there is a cool confidence to National Reserve, a magic thread that shines through as soul.

"Big Bright Light" brings their country roots to the fore, adding pedal steel to their mix.  And while "Motel la Grange" slows the tempo to a simmer, Walsh and company prove they'd be as comfortable closing down the honky-tonk as raising the roof of their hometown Brooklyn haunts.

"I'll Go Blind" might be the strongest track on Motel la Grange.  Built on a poppy piano line and punctuated by sharp blasts of electric guitar, the song could lend itself to repeated radio play while not losing its edge.   That's largely the appeal of National Reserve.  In the midst of a whirlwind of energy and edge, there's an easygoing spirit that underlies it all.  Even while working up a lather and giving themselves fully to the eclectic proceedings, after serving their time onstage for several years they know exactly who they want to be.

National Reserve are the rare roots act with teeth, representing music that spans genres and generations.  If they're not careful, they might just make themselves a national treasure.