Austin Lucas is due some credit.  Since his last release he has lost over 100 pounds, seen his partner through cancer, shaken his substance issues and recorded Immortal Americans.  He stares out from the jacket of his seventh record, perhaps scarred by his experience but stepping wide-eyed into what's to come. 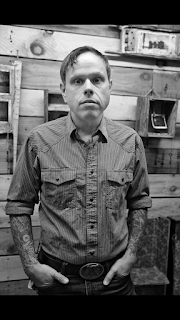 Lucas has also moved back to Bloomington, Indiana where he came of age as a punk and an outcast:  I learned to be a man / Watching 80s action movies with my friends / I searched my reflection for traces of great American men.  "Killing Time" contributes to Part 1 of a collection that almost seems to be composed of two halves.  That first chapter features a familiar Austin Lucas, documenting the lives of the "immortal Americans" who scrape and scratch and make their way beneath the mainstream.  Pedal steel haunts both "Killing Time" and "Happy", and those instantly recognizable vocals dodge and stab.  Lucas deserves to be considered among the foremost of our lyrical princes:  You were born a little sparrow / With an arrow in your throat.

The title cut is foremost among these more standard Austin Lucas offerings.  With its anthemic spirit and its embrace of the young, passionate and overlooked, "Immortal Americans" serves as among the defining moments of his career:  Children turn the radio on / Fists hit the air, praising rock 'n roll gods / From the soil they are formed / Born to grow corn and cut stone.  Lucas has become a bard for the least of these, living on the outskirts of our mainstream.  He revisits the haunts of his childhood home, perhaps seeing himself in the kids who still populate the parking lots and the late night streets.  Music pumps through their veins:  Sha-la-la goes the rattle and hum / from the hearth of a midwestern home.

Lucas seems to address much of Immortal Americans to that younger self, unfolding his dreams and expectations in light of present realities.  Are you happy / With your new life / Are  you happy / With the new world / Are you drowning in the dream / Of a shiny new beginning / Just like me.  With the benefit of hindsight, we regard our younger selves with a certain ratio of shame and affection, wondering what that person might think of the choices we've made.

But Immortal Americans is largely defined by its second half, which might speak to the influence of co-producer Will Johnson and engineer Steve Albini.  Pieces like "My Mother and the Devil", "Eye of an Asp" and "Between the Leaves" are far more immediate than anything Lucas has released to date.  Those striking vocals seem closer, more fragile and even more impactful, owing to Albini's analog recording and the generous amount of space around the songs.

"My Mother and the Devil" alternates between moments of skeletal acoustic guitar and pounding drums and electric guitar.  Lucas hasn't recorded anything with this degree of vulnerability.  Bits of silence separate the moods, like deep breaths that allow us an uncomfortable pause for thought.  My father says the devil and my mother / Are the only ones who'll be there / Always and forever / No matter what I do.

Matter of fact, the banjo playing of his father Bob Lucas appears throughout the record, serving to anchor the sessions in the sounds of Austin's childhood.  "Eye of an Asp" is a gorgeous duet between the voice of the son and the father's primitive strings.  The backing vocals of Chloe Manor float throughout Immortal Americans, complimenting the arrangements perfectly.  Much of this second half is rooted in dark folk traditions, sounds which were applied to a more upbeat effect about a decade ago on Lucas' tremendous Bristle Ridge collection.  But the shadows that fall across these more recent pieces are new.

To my ears, these two forces come together most effectively on "Monroe County Nights", a more driving tune that sounds like a collaboration between Austin Lucas and Will Johnson.  Like a contemporary Edgar Lee Masters of song, Lucas takes a bird's eye view of the Bloomington home to which he has returned, touching upon how time has changed the people and the place, and how we are changed in return:  By and by / We all are shackled / Caged by county lines / Wired, blood-drunk and born into the fight / By and by / We are no easy prey / Creatures prone to flight / By and by / On a Monroe County night.  By relaxing into what comes naturally, by welcoming a degree of intimacy and uncertainly into his music, Austin Lucas has created the most honest and direct music of his career.