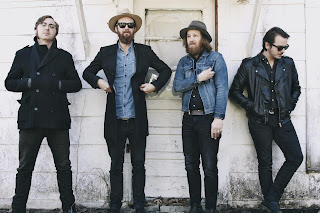 Just give it a couple listens and it'll sneak up on you.  Give The Pollies' Transmissions (This is American Music, Sept 28) a few turns, and you'll agree that they've been underestimated.  It's time for us to move The Pollies from the dusty shadows of americana into the light of day.

The band's website reminds us that The Pollies have never fit too snugly into the usual "roots rock 'n soul" that we associate with their Muscle Shoals area homebase.  That said, over the space of two full-length records and a quality EP with the late Chris Porter, The Pollies have never sounded quite like this.  Maybe we caught hints in "Something New" or "Ashes of Burned Out Stars" from 2012's Where the Lies Begin, or perhaps "Paperback Books" and "Games" from 2015's Not Here drew our gaze in a new direction.  But The Pollies have never so fully and confidently embraced the magic mix of garage pop and soul as heard on Big Star, or the radical free-range departures into noise a'la Wilco.

Transmissions is the sound of a band stretching beyond expectations, having served most recently behind singer-songwriter Dylan LeBlanc, and playing previously with Nicole Atkins and John Paul White.  There's a confidence and an ease beneath songs like the opener, "You Want It".  It serves as the in-your-face wake up call, a wall of thick noise and garage pop, with tumbling Keith Moon-worthy drum abuse and a swarm of fuzzed out guitars.  It's all come and gone in about two minutes, but it's enough to remind us that we're not entirely in Alabama anymore.

Or maybe we've just never given the Yellowhammer State its due credit for birthing genre-crunching acts like Phosphorescent, Lee Bains III & the Glory Fires, and Alabama Shakes.   It's not that frontman Jay Burgess and company have fully shed their familiar skin.  But even in the roots-facing cuts like "Hold On My Heart" and "Love's to Fault" there's a healthy evolution in The Pollies' groove.  The former offers lovely jangled guitars and a pop-perfect chorus, rivaling Gary Louris and The Jayhawks for their way with a hook. Likewise, "Fell in Love" has been bouncing around between my ears for days now.  "Love's to Fault" adds otherworldly wah-wah backing vocals for a 60's Nuggets touch.

That certain psychedelic sheen overlays nearly all of Transmissions, lending the album a much bigger sound than we'd hear in a barn's worth of roots music releases.  It effectively turns The Pollies inside-out on songs like "Summertime Suicide".  There's even a touch of glammy sneer to Burgess' vocal that reaches through to the lyrics:  Johnny sits back in the corner / While I'm shaking my head / His mouth is moving, but I ain't heard a word that he said / I know how he feels / He's just looking for a thrill / And I could care less why.

We become fully aware of The Pollies' transition when that beautiful noise kicks in on "Postcard Symphony".  The song eases in on a minute-long breeze of melodic synth, before coasting into a lazy So-Cal acoustic strummer about a factory-working father who dreams of jaunts in the country with his boys.  Around the three-minute mark, it all deconstructs into a far less rustic mess of feedback and electronic studio gabble, taking us on a trip of our own before coming together again for the song's idyllic conclusion:  Summertime postcard lays on the road / Son says "Dad I want to go".  "Knocking At My Door" begins with that noise, as a thumping drum beat leads an army of guitars into a cloud of bash and pop and the sound of a piano falling down a flight of stairs.

Don't like all that noise?  Want to go back to the garden?  I'll stay behind with The Pollies.  Sure, there's plenty of music that matters that plays it far more safe and straight.  But it's bands like The Pollies that hone the edge of Routes & Branches, and set us apart from countless other roots music outlets.  With their short sharp melodic glances and their disregard in the face of less traveled musical paths, we're just fine following them into the frontiers of roots music.

The other story behind the release of Transmissions is the rebirth of This is American Music, the "Southern indie record label" that brought us Caleb Caudle, Have Gun Will Travel, Great Peacock, Hurray for the Riff Raff and more.  In a day when our playlist can be fat with stuff from larger less discerning operations, we feel closer to our mission when we're able to share music from TiAM.  It's even better when those more carefully curated labels bring us superb stuff like The Pollies.

This week brings that new Hillstomp I've been hearing about.  We also celebrate the return of  Rosie Flores to the fray - her single marks our first look at a 2019 release.  And First Aid Kit releases a couple unheard songs that didn't really fit on their really fine January Ruins record.  Plus, this week it was announced that Hiss Golden Messenger will be unleashing Devotion: Songs About Rivers and Spirit and Children, a 4-CD package that includes remasters of their earliest records as well as a copy of their pretty hard-to-come-by Virgo Fool collection.  On a related note, my birthday is coming up in December.