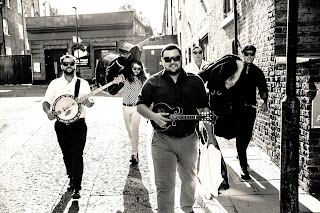 Stop me if you've heard this one before:  A young and fiery punk band matures, gradually adapting a more roots-oriented groove.  Lessons are learned.  Beards ensue.

It's almost the Genesis for our kind of music, the prevailing creation mythos.  Born just to the east of the Cascade Range in Bend, Oregon, Larry & His Flask were launched from that same primordial ooze.  The past fifteen years have seen the band change and morph from pure punk to what they call post-americana, from a couple brothers and their friends to a sprawling collective and back to an economical five-piece.  Call it the Roots Music Theory of Evolution.  The survival of the fittest.

Not counting an excellent, overlooked Endtimes recorded with Tom Vandenavond, it's been half a decade since Larry & His Flask issued a proper full-length record.  It's a hiatus that saw members alternately retreating to the Tropics, taking on side projects, working on families and considering the band's role in their lives (and vice versa).  Reckon / Repent / Rebirth.

Here at R&B, we've been monitoring the work of LaHF at least since 2011's All That We Know.  Through 2012's Hobo's Lament ep and 2013's By the Lamplight, the band earned their stripes as tireless and dedicated road dogs, a reckless and energetic act that left their crowded stages spattered with bodily fluids and their fans wanting more.  There was a time when listening to one of their albums could prove exhausting for the sheer energy and drive that leaped from the speakers.  With time, the scratching and clawing that garnered them their following began to wear away at their lives behind the scenes.

To our benefit, however, the Bat-signal for Larry & His Flask has been shone into the skies.  The members have assembled, acoustic instruments at hand ready once again to conquer the stages of America and the world.  As long as they can get home to the wife and kids before too long.  It's not just the individual members of the Flask that have changed, you see.  This Remedy  (Xtra Mile) has channeled that legendary energy in rewarding new musical directions, resulting in the outfit's most multifaceted and praiseworthy product to date.

More than most bands of their ilk (think Squirrel Nut Zippers, Legendary Shack Shakers, Trampled by Turtles), the Flask have always been a punk band that just happens to play with acoustic instruments.  They've also proven fearless in their eclecticism, granting space in their manic mix for elements of jazz, 'grass and folk.  On This Remedy, those diverse parts are given more room to unspool, leading to a clearer and less muddied musical statement.

Good news is that the collection still sounds very much like Larry & His Flask.  Diehard fans will thrill to that familiar fire-fueled sound on songs like "Dearly Departed", "You Won't" and "Atonement".  There's still a focus on mortality, on boldly staring down death:  And in your wake, dearly departed / Broken bottles, battered and bloody, broken-hearted / Do you feel better now? Just look at what you started.  "Atonement" is bright with those blatting brass that have always added to the party.  But even in the midst of the noise and fury, you might catch glimpse of positivity, light, warmth.

Those new qualities shine through in the band's embrace of a degree of melody and brightness, in a greater focus on songcraft.  There's always been a strong sense of theatricality in the Flask's stage presence, and especially in Ian Cook's vocal performance.  "Never All the Times" is perhaps the singer's strongest moment, a piano-based number that also showcases the quintet's underappreciated harmonies.  Cook also shines on "Doin' Fine", a road-vs-home reflection that bounces along like a fractured rag:  Peace and quiet take some getting used to / Was always moving forth and back, never could keep track.

The surprises on This Remedy come from the pieces that depart the furthest from the act's proven formula.  While eclecticism has always been part of the Larry & His Flask® brand, listeners might still not be prepared for "Hoping Again", which boasts a real live guitar solo.  It's as close to country as you're bound to get, reining in all that energy and aggression for a more measured, introspective number:  If there's a maker above they'll be happy to know / That I did my best in the big show.  "The Place That It Belongs" introduces bits of bluegrass, and you'll even hear touches of Latin rhythms and guitars on "Behind the Curtain".

This Remedy ain't the group's desperate grasp for the golden ladder of fame 'n fortune.  Even with its unexpected bits, it's still very much a Larry record.  But tunes like the title track and "Ellipsis" remind listeners of the band's skill as musicians and showmen.  "This Remedy" gallops on heavenly harmonies, mandolin and banjo playing for the angels:  I will find the bridge to this melody called love, the final minute of the song fades to an otherworldly overheard whisper.  Offering the best of old and new Flask, "Ellipsis" is my personal favorite, a driving anthem crossed with a grammar lesson.  Both give lead to melody without compromise, boasting singalong moments that will fuel live shows for years.  This is the welcome rebirth of an underground roots music legend:  So bid farewell to the ones you knew / Like a drunk old sinner born anew / And say hello to the sweeping winds of change ...

With this Episode we catch our first glimpse into releases for the first couple weeks of 2019. We share an unexpected stand-alone single featuring Jason Isbell's Newport Folk collaboration with David Crosby.  There is a spoonful of yummy Mayonnaise on behalf of Deer Tick.  And we offer the opening salvo from the return of the Flesh Eaters, featuring Dave Alvin and John Doe.