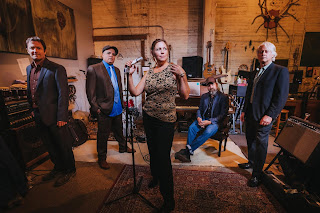 
Willy Vlautin had fronted Richmond Fontaine for years when he was inspired to write some songs for a voice other than his own.  Those songs, delivered by Amy Boone, wouldn’t have sounded right coming from Vlautin himself.  Colfax by The Delines wouldn’t have been as marvelous a record without her – it landed just below Sturgill Simpson for my favorite album of 2014.  With much of the follow-up completed, Boone was seriously sidelined after being struck by a car, and she faced years of recovery.  It only made sense to put the project on hold until she was ready to return.   The one-time Damnations singer is simply that crucial to the sound of The Delines.

Let’s be honest, Willy Vlautin is no slouch.  His hard luck slices of life perfectly compliment Boone’s delivery.  With Richmond Fontaine and as a fiction writer, there is hardly a voice I trust more in our kind of music.  But The Delines aren’t just Richmond Fontaine fronted by a woman, it’s a whole new chapter in Vlautin’s work, just as The Imperial (El Cortez, Jan 11) is a different, more ambitious beast than Colfax (or their limited release Scenic Sessions from 2015).  The band’s debut was almost an experiment, a happy accident that brought together the perfect pieces to carry out Vlautin’s musical dream.

The individual elements that make up The Delines’ “late night country-soul” are much the same, including the solid rhythm section of Sean Oldham and Freddy Trujillo.  Just add keys and horns and stir.  Let sit until most of us are deep in our dreams, when only the lonely and the haunted remain awake.  Where The Imperial differs is in its grander, more cinematic arrangements, courtesy in large part of keyboard player Cory Gray.

“Holly the Hustle” and “Eddie and Polly” are classic Willy Vlautin stories, his characters bleak and bleary-eyed, beaten down by a lifetime of bad choices and plans gone awry.  “Cheer Up Charley” brings slide guitar to the mix alongside horns and choral backing vocals for the album’s fullest arrangement.  Boone encourages her friend to climb from the wreckage towards a new start:  You ain’t always been this big a mess / Sitting outside Slim’s daytime drinking / Feeling sorry for yourself.

There’s no dodging the jazz and soul influences throughout The Imperial.  The record’s final cut posits Boone’s smoky delivery alongside Gray’s keys as the narrator keeps a long and lonely night vigil, awaiting signs of the coming day:  I know the night will end soon / I just get so weary waiting on the blue.  It’s the most haunted track on a CD shadowed with ghosts.  Often those spirits are the remains of expired relationships.  “He Don’t Burn For Me” is a soulful simmer, with a touch of gospel in the backing vocal and a yearning trumpet solo:  It’s like living in a broken down sigh.

On these new sessions, The Delines are more confident in their direction and their identity.  Sometimes this means permitting songs to unfurl in their own good time.  Elsewhere, the solidified confidence means taking chances and working new angles.  The beautiful “Let’s Be Us Again” is a Solomon Burke-like country-soul gem that finds Boone begging her beau to resurrect a relationship that’s been snuffed.  The band typically opts for a lighter touch, though the title song swells with strings and added layers for an effective touch of drama.  This strain of country-soul is hard to come by nowadays, even in the midst of a newfound appreciation of artists like Bobbie Gentry and Charlie Rich.  Though both Willy Vlautin and Amy Boone have dabbled in the stuff over the years, The Imperial creates a space for both to indulge their fantasies, to give rein to talents in service of a sweet melancholy that nourishes the soul.

Now that we're wading through the spent confetti of a new year, let's remind everyone what happens here at R&B HQ on a weekly basis.  What you'll find (just about every Sunday (or Monday)) is a record review like this one, a piece that focuses more on something you might want to pull onto your music radar, as opposed to rating the CD on a scale from good to bad.  It just doesn't make sense to spend so much valuable time telling folks what NOT to listen to.  I'll also include a ROUTES-cast for the week, a Spotify playlist which features precisely thirty songs "from the frontiers of our kind of music".  Since Routes & Branches is dedicated to the spirit of music discovery, most of the playlist is devoted to new or forthcoming stuff.  We'll tend to leave about five ROUTES-casts up at a time on Spotify, removing them one-by-one in order to make room for more.  My name is Scott Foley, and you can reach me at routesandbranches@gmail.com.

As always, it's good to tell a trusted friend about what you've discovered here at Routes & Branches.  Share the site on the social media platform of your choice, and give our ROUTES-casts a spin during your next book club, wedding or long night alone.