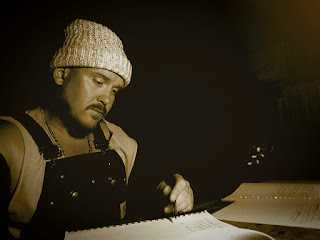 As we march heedlessly into the month of March, let's not neglect to express our sincere gratitude for the records which shepherded us through the dark of February.  We call it:

In order of appearance, of course.

The Pines have been making spirit-haunted folk music for more than fifteen years.  Awash in ambiance but deeply rooted in the vernacular of acoustic music, it's a sound that only makes sense as a reflection of their Great Plains home.  Following a handful of records alongside brothers Benson and Alex Ramsey, David Huckfelt has released his first solo CD, Stranger Angels.

Huckfelt's new collection is a product of its environment as well, taking shape in the wake of the artist's retreat to Isle Royale on Lake Superior, our country's most remote national park.  The songs don't necessarily dwell on the writer's retreat into that sacred space, though the natural world plays a crucial role throughout.  Instead, like a prophet that disappears to wander the wilderness, Huckfelt has re-emerged with a message and a warning.

Stranger Angels is rich with poetry, a collection that's haunted by the world in a manner that's remote yet completely immersed in the everyday.  Human and animal and mechanical voices interrupt and compliment Huckfelt's work, making the world another instrument and a catalyst in the world falling apart and possibly coming back together.  A slowing train introduces "As Below So Above", a stomp 'n slam blues rocker in the tradition of Ray Wylie Hubbard.  There is no death, just a change of worlds, he sings.  Huckfelt has called his new work a soundtrack to the thin place between worlds.  The frontier between here and there is crossed and criss-crossed throughout the record.

I've frequently regarded the blues as an apt vehicle for this kind of prophetic poetry.  It's a presence that's woven across these songs, from the dark and shattered march of "Lost 40 (Some Dark Hollow)" to the footsteps that walk through "False True Lover Blues".  "Lost 40" incorporates the found sound of an ax striking a piano:  Mercy and grace ... the haunted air is unlaced / Give me a moment of silence ... after a season of violence.

Huckfelt is a skilled enough writer that he never resorts to specifics when delivering a message about the state of our nation.  He's cited poets of the natural world like Gary Snyder and Rilke as influences, especially admiring their "economy of words".  It's a language that overflows with meaning and shines with possibility even as he dwells on the darker forces at play.  The outstanding title cut sets the stage:  Wild mustangs starve in the hills outside Las Vegas / And the west is burning like a lake of fire / When the desert comes to swallow up our prairies / You'll wish you had not dared called god a liar.

The sounds of Stranger Angels won't be entirely unfamiliar to fans of David Huckfelt's work with the Pines. It's musically atmospheric while remaining anchored in the familiar expressions of folk music.  "King Whirl" features spiraling banjo and a grounding bass, shot through with shocks of electric guitar.  Huckfelt is surrounded in studio by a talented cohort of friends, from Phil Cook to Dave Simonett, from Erik Koskinen to the transcendent vocals of Sylvan Esso's Amanda Meath.  His own vocals recall MC Taylor or Simone Felice, soulful and intimate especially as paired with Meath on tracks like "Still and Still Moving".  With the help of producers Andrew Broder and JT Bates, Huckfelt has created a sonic path that bridges those thin places, a document that could only come from a person who has learned from solitude, then grown from collaboration.


This first week of March brings us new stuff from Quaker City Night Hawks and Adam Klein.  Durand Jones and Lonesome Shack bring the soul and the blues (respectively), and Cactus Blossoms present the long-awaited follow-up to their successful debut record.  The rest of the month will have to work pretty hard to match February's generous offerings.  At this point, we're especially looking forward to Patty Griffin's first CD of originals in several years.  Over the Rhine brings us Love and Revelation on March 15, and March 29 will serve as the launch day for both Steve Earle and Son Volt.  M Lockwood Porter is also firmly on our radar with the late month release of Communion in the Ashes.

And this week we added stuff to the release calendar by Nick Lowe & Los Straitjackets and a live set from Anderson East.  We added what seems to be a concept record from Kevin Morby, as well as something from Tallest Man on Earth, who has been releasing self-standing singles since his last full-length.  Please pay a visit to A Routes & Branches Guide To Feeding Your Monster via the link to your right.