My year is defined by lists and release dates.  Fridays are a working holiday for me, and I look forward to the last week of the month, just so I can do this: 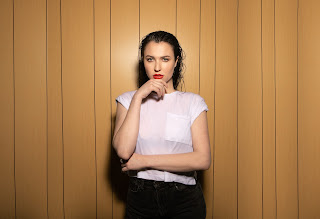 It's a funny list, really, covering territory from our familiar americana/alt.country friends Shovels & Rope and Yawpers to a beautiful and challenging Kevin Morby concept record that didn't truly impact me until ... well, yesterday morning.  This is all in order of appearance.

If everything goes as planned, May will bring a bounty of new stuff, from Caroline Spence's Mint Condition (from which we've already heard several songs) to a new, retooled Felice Brothers.  We'll hurrah the return of AA Bondy, and welcome new projects from Justin Townes Earle and Left Lane Cruiser.  More extensive R&B reviews are likely for Massy Ferguson, Ian Noe and the Portland alt.country supergroup TK & the Holy Know-Nothings.  Daddy loves his work.

Last March, Kacey Musgraves issued her 4th record, Golden Hour.  It was heralded with great praise from some pretty unlikely reviewers, folks for whom roots music was unfamiliar territory.  Of course, as months passed, the project was deservedly nominated for all sorts of Grammys and CMAs and iHearts and such.  And no review or recognition failed to note that with all its synths and beatz, Golden Hour really didn't sound too much like a country album.

Back up a couple years earlier, when Lucette humbly issued her debut full length, Black is the Color.  For those who heard it, this was roots music, checking most of the familiar boxes to qualify as folk and/or country.  Partly because the session was produced by Dave Cobb (on his way to becoming ubiquitous uber-producer de jour), there were also some contemporary production elements to songs like "Bobby Reid".  The video for that tune featured JD Wilkes as a fire-and-brimstone preacher, and Sturgill Simpson as a guy in a black vest whom Lucette whacks with a rock.

Incidentally, all this was prior to Sturgill Simpson becoming Sturgill Simpson - the video was filmed before the release of his first solo outing.  But the Canadian songstress and he found some commonalities in their approach to music, keeping in touch and even touring together in the ensuing years.  Now firmly established as one of the foremost names in our kind of music, Simpson serves as producer for Lucette's follow-up, Deluxe Hotel Room (Rock Creek, May 17).

I mention Musgraves by way of noting that this new CD will take many by surprise, folks who might've expected Bobby Reid: the Return.  Or at least High Top Mountain: Pt II.  It's a different record than Golden Hour, and nobody who presses "play" will recognize Sturgill Simpson in the mix.  While Dave Cobb incorporated heavier guitars and dark atmospherics throughout Lucette's debut, Deluxe Hotel Room takes no special measures to sound like a roots record.  There are no banjos, no slide guitars, no fiddles.  Yet it's a remarkable turn of events for an artist who's fearlessly and deliberately bucking the trends in pursuit of her muse.

The LP's title track begins organically enough, a piano supporting Lucette's sad and sultry voice:  Traded in my body, thinking I could make my bed / In a deluxe hotel room, wishing I was home instead.  "Out of the Rain" begins with a digital click track and a squelchy bass, a whisper of keys.  It's almost a surprise when a good ol' fashioned analog saxophone takes a solo.  Most of the tunes on Deluxe Hotel Room are slower, airy pieces couched in electronics, synthesizers and digital devices that might have seemed more at home on a Lana del Rey record.  Like del Rey, Lucette sings like an angel, though her voice immediately betrays those roots elements.  It's the perfect vehicle to deliver these downcasat vignettes: When you're lonely as I am / You make up excuses to suffer.

"Full Moon Town" introduces a heavier, speaker-rattling bass and beat: There's a half-priced buzz to be had / And a speed trap stretch up ahead ...  "Angel" is the CD's brightest, most upbeat cut, focusing the electronics in a pop direction, like Nicole Atkins' recent early rock and girl group influences.  While Lucette's soaring vocals are typically treated with echo and reverb, she never sounds lazy or removed.  And while the trappings are atypical, thematically and structurally Lucette's songs are firmly in the roots realm.  Where Musgraves' recent work sounded like a California breeze, Deluxe Hotel Room brings to mind rain and sleepless nights and no place to go when the bars are closed.  I've been waiting on my mind / To come around and think for itself / I've been feeling so unkind / Mostly when it comes to myself  she sings on "Talk to Myself".

This is not to say that the record's a downer.  On the contrary, it's just wonderfully successful in establishing a mood.  "Fly to Heaven" is a gorgeous and soulful cut, with Brad Walker's sax taking a more prominent role.  Repeated listenings serve to reinforce the boldness of Lucette's songs and her undeniable vocal gifts, and the arrangements start to sound more suitable and even complimentary.  Moreover, what comes through most clearly is the r&b and soul influence throughout.

Especially in our kind of music, listeners seem to want their artists to occupy a static space, to conform to preset parameters.  Performers like Lucette who exceed those conservative boundaries are regarded as threats or offenses to the genre.  She and Simpson deserve praise, I would counter, for disrupting that stasis and for successfully challenging the fringes of roots music.  Deluxe Hotel Room will take Lucette into places she would never have seen had she replicated her previous collection.  However far she goes, she will owe it not to the synths and the production flourishes, but to her obvious abilities as a writer and a singer.

This week, A Routes & Branches Guide To Feeding Your Monster has been plumped with new listings from the Black Keys, Willie Nelson and a CD of duets by Bruce Robison & Kelly Willis.  Hackensaw Boys announced a new June EP, and that Bruce guy promised something as well.  One click on that link to your right may assure you an afternoon of aural pleasures.  Or you can just follow us on the Spotify, because here's your ROUTES-cast: