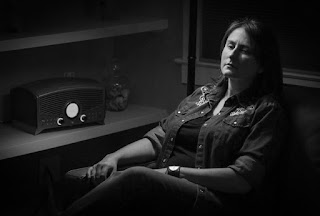 
These days, albums aren’t so much a thing.  It’s not necessarily how folks encounter new music.  Here at R&B HQ we’re equal opportunity listeners.  We accept your self-standing singles, and we’re just thrilled with the advent of a new full-length record.  Frankly, it’s been that way since we were a little blogger, walk-running into the Grants Pass PayLess with allowance in our pocket and a lump in our throat.  Some days we’d trade that allowance for 45s, while other days we’d spring for the whole enchilada (we also spent our not-so-hard-earned dollars on comics and on an unreasonable amount of baseball/football cards (but rarely on enchiladas)).

Erin Enderlin’s trying something new.  She’ll issue the new LP, Faulkner County on November 1 (via Black Crow/Blaster Records).  It’s the official follow-up to her superb 2017 volley, Whiskeytown Crier.  Back in April, she released the first “Chapter” of the record in the form of a three-song EP.  Every two months following, Enderlin has shared another Chapter, three new songs from the CD that will finally be published as a full-length in November.  Each EP reportedly focuses on the story of a single character.  Like its predecessor, regarded as a whole it serves as a chorus of fictional voices from small town America.

Where Whiskeytown served as a gazette for an invented town, Faulkner County borrows its name from the Arkansas region where Enderlin came of age.  More specifically, the songwriter hails from Conway, namesake of Mr Twitty (and home of something called Toad Suck Daze).  In a sense, this session brings her full circle, from those impressionable years to her days as a Nashville writer and usher at the Opry, then back home to her humble beginnings.

Prior to her solo stuff, Erin Enderlin served as a successful Nashville writer, landing songs with Randy Travis, Trisha Yearwood, Lee Ann Womack and others (plus, she shared a house with future Savior of Country Music Chris Stapleton).  Jamey Johnson took her under his greasy wing to produce Whiskeytown (with Jim 'Moose' Brown), also welcoming Ricky Skaggs, Jessi Alexander and Stapleton into the studio. Both Johnson and 'Moose' return for these new sessions, along with friends like Vince Gill, Alison Krauss and Cody Jinks.  While there are cowriters galore, this convergence of influences emerges as an impressively singular songwriterly vision.

Digging through previous interviews and profile pieces, it's obvious that Enderlin is a lifelong student of country music, a died-in-the-wool fan who is fortunate enough to be able to find her way in the footsteps of artists she loves.  Last year she released a standalone single called "World Without Willie", and she's recorded one of my favorite takes on the oft-covered classic "Hickory Wind".  She is a songwriter in the classic sense, capable of wielding words in a timeless fashion, even as she is dedicated to paring it all back to its pure essence.  And the pure essence of country music is the story.


Accompaniment in the service of Enderlin's songs is basic, but consistently hitting the sweet spot.  Her run through Dolly Parton's "Old Flames" communicates with little more than keys and percussion, joined by pedal steel and guitar only as the chorus kicks in.  While we're never more than an emotion away from a sweet pedal steel line, strings are applied more sparingly.  "I Can Be Your Whiskey" delivers a shining fiddle outro: I can be your whiskey / I can be your cigarette / I can drown the memory / That you're trying to forget.  Enderlin and friends practice maturity and restraint even on the collection's heaviest track, the trucking anthem "Man With 18 Wheels", boasting the great line, His home away from home is the house that Peterbilt.

With all the talk about Erin Enderlin's prowess as a writer, reviews can overlook the importance of her skill as a singer.  Her finesse shines through brightest in service of heart wringing ballads like "Broken" or Gene Watson's "Use Me Again".   Like Lori McKenna, her delivery is accessible and never showy, even understated in the tradition of Alison Krauss.  Listeners might also catch glimpses of Reba McEntire's attitude or Kacy Musgraves' more contemporary prettiness.

Ultimately, Faulkner County tells stories, leaving listeners with the picture of a town haunted by lost souls and dark secrets, folks drifting away from last call with nobody to go home to.  After all, that's country.  Even so, some of Enderlin's most impressive pieces boldly challenge the long established country music traditions.  "Hometown Jersey" is a Springsteen-esque song about a hometown hero, lifted high on the shoulders of the townspeople one last time.  And "Queen of Marina del Ray" is a slyly transgressive cowrite with Felix McTeague and the great Shane McAnally.  The identity of the narrator of the blues-rock number only gradually becomes evident:  Blessed with a sick kind of strangeness / I wore like a cheap crown of thorns.  Moments like these speak to Erin Enderlin's ability not just to honor and embrace the beloved country music of her youth, but to play an important part in moving the genre forward into new lanes, telling new stories.

The first couple months of 2020 are just beginning to take shape, giving us some stuff to anticipate during the deep midwinter.  Foremost of these is John Moreland's aptly named LP5 (because it's his 5th record, see?), promised on February 7.  That very same day we'll be honoring the release of Best of Luck (Anti) from Christopher Paul Stelling.  Robbie Fulks is plenty good at writing his own music, but he also has a way with covers, as his 50-vc. doberman sessions proved a decade ago (Fulks' take on "Irreplaceable" would certainly appear on my list of favorite roots covers).  Save a couple spaces on your record shelves for the November 1 introduction of a double LP collection celebrating Bob Dylan's underappreciated Street Legal record.  The ever-reliable Bloodshot label will gift us with a pair of compilations next month, including Wayne Hancock's Man of the Road: The Early Bloodshot Years (Nov 15) and Scott H Biram's Sold Out to the Devil: A Collection of Gospel Cuts (Nov 22).  As we learned a couple weeks ago, Bonny Light Horseman is the folk music supergroup featuring Anais Mitchell, Eric D Johnson of Fruit Bats and producer Josh Kaufman, who has worked alongside the National and Hiss Golden Messenger.  You can expect the trio's self-titled debut January 24.  Discover more juicy release date gossip by visiting A Routes & Branches Guide To Feeding Your Monster.

ROUTES-casts from 2019 have been removed; subscribe to our Spotify page to keep up with all our new playlists!