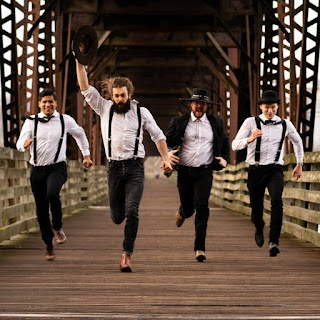 Halloween is coming.  I've never been a fan.  I only remember going trick-or-treating twice as a child, and we lived far enough outside of town that nobody ever walked up to our house to avail themselves of the bowl of dimes my parents prepared.  In my radio days, fellow programmers would present playlists of vaguely spooky songs.  And I wouldn't.  I like to think dark music is something to enjoy year-round, recognizing the shadow side of any life no matter what the calendar tells us.

Dead South could certainly fit on a Halloween playlists, were I to build such a monster.  And, like many dark-dwelling roots acts, the quartet never take themselves too seriously.  Out of the Saskatchewan capital of Regina, they were largely inspired to take up their stringband instruments by Trampled by Turtles.  This Summer, they played alongside their heroes at Red Rocks here in the Square State.  But it all began with the 2013 release of an EP, The Ocean Went Mad and We Were To Blame, which set the flame burning for their frenzied, unholy roots hybrid.  Try "Banjo Odyssey" for example, the crowd-pleasing epic which boasts the line: I guess she's my cousin / But she needs some sweet lovin' anyway.

Certainly, it wouldn't hurt our kind of music to take itself less seriously.  But Dead South aren't clowns.  They are instrumental acrobats, setting fire to the stage in their trademark black-and-white "Amish rebel" attire.  Frontguy Nate Hilts has cited cinematic influences on the band's sound, inspiration ranging from "Spaghetti Western" composer Sergio Leone to horror maestro Wes Craven and generational bad boy auteur Quentin Tarentino.  Dead South sharpened their vision with their debut full-length, 2016's Good Company, stirring up a dedicated fan base at home and overseas in Europe with their feverish touring behind an energetic live act that earned them fans well outside of the roots stable.

As Dead South prepared 2016's Illusion & Doubt, they released a stopgap video for an earlier song, "In Hell I'll Be In Good Company".  Featuring the quartet hamming it up in a countless array of locales, the piece went viral in a way no bluegrass-breathing band had previously, introducing the quartet to new stages and marketing opportunities.  They had also accidentally positioned themselves to be taken under wing by a larger label, poised for Big Things.

Which brings us to their third full-length LP, Sugar & Joy (Six Shooter, Oct 11).  The recording sessions marked Dead South's first time working in a studio outside of Canada, collaborating with Memphis FAME-trained producer Jimmy Nutt at his Sheffield, Alabama studio.  Played at a racing pace with copious banjo from Colton Crawford and a Danny Kenyon's bonus cello solo, "Blue Trash" sets the stage.  On the self-referential song,  Dead South seek to define themselves against a popular conception of bluegrass music:  I'm feeling salty but I'm drinking Sprite / That tangy banjo's sounding / So dang bright.  While the act's music is sturdily rooted in the familiar tropes of folk and bluegrass, they feel no compulsion to color within those lines.  To that point, "Crawdaddy Served Cold" addresses the glamours of a touring band:  Life ain't easy being on the road / It's a van full of filthy trash / And a bag of stinky clothes.  While harmonies aren't especially tight, the voices of singers Nate Hilts and Scott Pringle sound perfect side-by-side, and largely define the quartet's sound.

With his cottonmouth delivery, Hilts is a top-notch vocalist, especially on slightly unhinged bits like "Alabama People":  Hungry people in Alabama / Broken people in Alabama / Lonely people in Alabama.  One of Sugar & Joy's spotlight cuts, "Diamond Ring" celebrates the band at its best.  A story of appetite and greed, the lengths folks might go to scratch that itch, it includes old Western tongue-in-cheek backing vocals and some stellar musicianship:  Old William has a stash of gold / So I went to his place with my pistol and my grace.

Of course, Dead South aren't the first band to project a punk spirit onto roots music.  Heck, we've spent over a decade tracking down gems like Devil Makes Three and Larry & His Flask, Legendary Shack Shakers and Whiskey Shivers.  But Hilts and co. are carving themselves a niche with their custom blend of fireball playing and dark storytelling.  They find their lane with tales of tragedy and woe, desperation and melancholy, typically delivered with a devilishly subtle wink and a nod beneath titles like "Smooching in the Ditch" and "Every Man Needs a Chew".  "Heaven in a Wheelbarrow" trades in fire-and-brimstone, behind Crawford's rolling banjo and shouted backing vocals.  The record's title is borrowed from the collection's oddest bit (a recurring habit for Dead South), "Fat Little Killer Boy":  Fat little killer boy / Eggs, sugar and joy.  The line is repeated, leaving us with a cursed story of gluttony and revenge.

I'm constantly interested in an artist's inspiration, the music they listen to on the long straight roads between shows.  On Dead South's Spotify page, each member offers a bit from their own playlist, with a line-up ranging from Wanda Jackson and Ennio Morricone (Nate) to Booker T and Tool (Scott).  Sugar & Joy is the wickedly addictive product of this recipe from an outfit with a dedication for matching the spit and energy of their live act in a studio setting.  Nutt rises admirably to the challenge of capturing that elusive spirit on songs like "Broken Cowboy" and "Black Lung".  Dragged behind Kenyon's walking plucked cello, the latter tune tramples tradition and leaves strings smoking in its wake: West Virginia's home and that's where we're staying / To the blade of the Bible hymn / Jesus says we're wicked, so we just keep on pickin' / At the scab of the open mine.

These are monumentally good days for new music.  Those of us with eagerly open ears are threatened with an overwhelming wave from Friday to Friday.  Listen first to Wilco?  To Angel Olsen?  Kelsey Waldon maybe?  From my vantage, while there are some good weeks on the horizon none come close to these last couple for sheer bounty.  By the way, I'd recommend Wilco first ...

Save room on your server for the following, added to A Routes & Branches Guide To Feeding Your Monster since last we convened.  Most importantly, Lucero came seemingly out of nowhere with this week's Before the Ghosts: Acoustic Demos.  The Saving Country Music blog also drew my attention to an outfit named Likely Culprits, boasting contributions from a rogue's gallery of session masters.  On a lesser scale, eclectic Austin band White Denim will be offering a live set, In Person, on October 29.  And if you've got an itch involving the Mavericks covering Marvin Gaye, Springsteen or John Anderson, you can scratch it on November 1 with the arrival of Play the Hits. Almost a year ago, Joe Henry revealed that he had been dealt a lifechanging cancer diagnosis.  Then, of course, he went into the studio to create The Gospel According To Water, to be shared with us all on November 15.  Add Molly Burch Christmas Album to your wish list, and maybe even The Juice, G Love's New Years present to us all.  Finally, few if any labels have spent as much time on our R&B playlists than Bloodshot Records.  And nobody puts together a better anthology.  In celebration of their 25th anniversary, the label will celebrate their sweet Chicago home with Too Late to Pray: Defiant Chicago Roots on November 8.  The collection features unreleased stuff from alt.something denizens like Robbie Fulks, Freakwater, Handsome Family and more.  Your weekly gift of our ROUTES-cast: