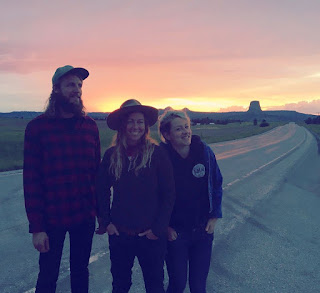 Was a time when an alt.country outfit named Patti Fiasco served up some of the strongest stuff originating from our faire Square State.  Much of that credit was due to frontperson Alysia Kraft, whose presence threatened to overflow the small stages upon which the band performed.  As fate would have it, Kraft crossed paths with singer-songwriter Staci Foster at SXSW some years ago, launching a partnership that would become Whippoorwill. With drummer Tobias Bank in tow, they've just unleashed the full fury of their debut full length, The Nature of Storms.

There's something elementally right about a trio, the merging of paths, three distinct musical visions.  In the case of Whippoorwill, Foster brings a strong foundation of indie folk which Kraft heats and bends in a country direction, and Bank's array of percussive expression gives the project an unexpected edge.  When it all comes together, the triumvirate generate their own storm front, a dark and sometimes tempestuous cloudburst of sound and emotion.

While I've followed Kraft for years, and I've been familiar with Bank's work with the heavy blues-rock outfit Von Stomper, Foster's voice is a revelation to me as a singer and a writer.  In both capacities, she provides the perfect balance for Kraft, an entrancing sound which defines the tone for Nature of Storms.  The group sets into "Cold Sound" cloaked in an atmospheric reverb, Kraft adding punctuation to Foster's voice before Bank's tripping drums kick in, dragging angular, stabbing guitars close behind the tuneful drive: Autumn brought colors that I'd never seen before / And I wanted something to change.  The three voices on "I Got Drunk" fold together seamlessly like those of classic Fleetwood Mac, introducing an original fourth voice.

Foster sings: I recall you calling me crazy / But that's not really me / It's just the way you made me.  Nature's songs speak of weathering storms, meteorological, emotional, social and otherwise.  One of the record's most contemporary tracks, "California" speaks to the escape of the road, chasing a tentative promise on the horizon: I don't need to cut and bleed to know I'm alive / California, won't you please just be kind.  Emotions color the horizon like clouds, and the songs can read like a map from the thicker, overcast "Great Lakes" to the sonically brighter "Martindale": I was born a supernova / 4th of July middle of nowhere / Master blaster firecracker, made to self-destruct.

Foster's harmonica drills through several cuts, and Kraft's electric guitar is Whippoorwill's secret weapon.  The arrangement is especially potent when arrayed alongside Foster's recurring banjo.  Producer J.Tom Hnatow, a member of the similarly expressive Horse Feathers, adds shining touches of pedal steel and guitar atmospherics to color to the edges.  There are unexpected gestures throughout the record, like the distorted drum that kicks "Premonition" into gear, like an overworked motor struggling to life.  "Change Gonna Come" juxtaposes crunching electric guitars with free-floating pedal steel, reminding listeners that the steady tide of change is life's only constant.

"Eventide" stands as the album's highwater mark, a steady-rolling roots-pop gem recalling HC McEntire and Mount Moriah.  Like McEntire and company, Whippoorwill assemble familiar musical components in appealing and unanticipated combinations.  Kraft sings: I'm gonna take 27 to Amarillo / Leave my broken heart in the hotel room / With the residue of cigarettes and strangers / With the hum of the AC and cicadas.  Nature of Storms addresses issues of seasons, distance and letting go.  The collection outlines the picture of a life in flux, perhaps moving away from disappointment and doubt, but looking ahead into the glare of possibly brighter things.  Whippoorwill has spent the past couple years honing their vision and adding miles to their sound.  With strong promotion and a little luck, there's no reason their appealing roots blend won't lift the members above the clouds and onto the national scene.


Hey all, don't forget that we've got a couple Very Special Episodes on the horizon between now and year's end (beginning next week!):

All this time, we'll continue adding new stuff to A Routes & Branches Guide To Feeding Your Monster.  This week, for instance, we re-added Micah Schnabel's Teenage Years of the 21st Century, since it finally has a release date (Dec3).  British folk writer Bill Fay continues his career resurgence with Countless Branches (Dead Oceans, Jan 17).  Looking into February, we've saved some space for Chicago Farmer's Flyover Country (Feb7) and Secret Sisters' Saturn Return (New West, Feb 28), produced by Brandi Carlile.  While we have yet to track down a date for Kids Like Us by the Grahams, one of Richard Swift's final projects prior to his passing.

ROUTES-casts from 2019 have been removed; subscribe to our Spotify page to keep up with all our new playlists!