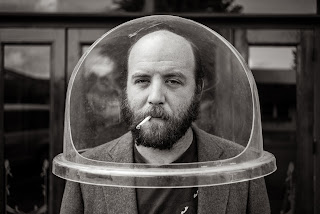 Last April it happened with Daniel Norgren.  The eclectic Swedish roots artist broke onto my field of vision last year, several records into his career.  I like to think I keep pretty close tabs on who's doing what, where, but there's only so much space in my restless ears.  Now the same has happened with Bart Budwig, an Oregon resident who recorded his debut collection more than a decade ago. The discerning Fluff & Gravy label will be releasing Budwig's Another Burn On the Astroturf on January 24, assuring that those of us with short attention span have even less of an excuse to plead ignorance.

On one of those earlier cuts, Bart Budwig asks, Where have all the average people gone?  That's the songwriter in a phrase, boasting numbers that portray him as a luckless Everyday Joe, a cosmic country lawn gnome as one reviewer put it.  But this bystander masterfully wields a blunt sense of the absurd and a soulful vocal delivery that's anything but common.  After years of honing his instruments, Budwig comes across like a hybrid of John Prine and Nathaniel Rateliff, perhaps with a little touch of Harry Nilsson's flair for the theatrical. For the occasion of Another Burn, he's written some new songs and re-recorded a couple others, surrounding himself with a talented cadre of associates on the highest profile release of his career.

Budwig's early records range from live in studio to downright lo-fi, setting up the mics and just pressing RECORD. This new project doesn't turn those tables entirely, but Another Burn presents a fuller, more realized edition of his loose, understated vibe.  And while country and folk have served as the vehicles for Budwig's songs to date, the new collection skews confidently in a more soulful direction, a strategy that allows his uncommon vocal gift to shine.

A fireside strummer on 2018's Sabai, "Time For Two" kicks in with Stones-y fervor and an indelible guitar riff courtesy of the man behind last year's An American Forrest record.  With ecstatic yelps and a briskly walking piano line from Seth Kinzie, Budwig and friends generate an immediate jam worthy of the aforementioned Night Sweats.  I started cleaning my place when you came through / Tried to dust off my heart, got dust on you.  It's an infectious sonic party set to lyrics about a man who doesn't necessarily have the bandwidth for a meaningful connection: Just need a place to sleep / Maybe eat some fried chicken, brush my teeth.

"Rolling Stoned" struts with a similar simmer, with the added bonus of a John Craigie harmonica solo.  The off-the-cuff appeal of Budwig's previous recordings is even stronger on these full band sessions, lending songs a ramshackle spirit that frequently shifts into a deeper groove, though tunes are rarely allowed to stretch out beyond three or four minutes.  The instrumental confidence is juxtaposed with the abiding spirit of Ain't I good enough to fall in love with / Am I better off being alone.

It seems Bart Budwig has never taken himself more seriously as an artist than on Another Burn.  That said, the self-directed sense of the absurd that has characterized his work to date remains strong on pieces like "The Sock Song".  The easy-going country-soul boasts group harmonies and barroom slide guitar, likening wayward laundry to a wandering lover: You always said relationships / Are like a pair of dirty socks / One of them likes staying / One likes getting lost.  "Human Again" features one of Budwig's most impressive deliveries, remarking how that rare love connection might at least temporarily erase those feelings of inadequacy: If I could find the will to stay / And you could find a way to bend / We'd run through the trees, make love on our knees / It's good to feel human again.

While he masquerades as a hapless average joe, there's a classic songwriter beneath Budwig's facade, an artist who plumbs some lovely emotional depth from time to time.  "First To Go" might recall a barebones Bonnie Prince Billy piece, rough hewn and deceptively vulnerable.  Allison Oleander's devastating "Oh Mother" pulls aside the curtain to reveal the effects of alcoholism on a family, punctuated by graceful harmonies and mournful fiddle from Ben Walden: He can only love you so much when he's chosen to drown.  One of the CD's real revelations is the reinvention of Nick Drake's "Northern Sky", replete with Budwig's trumpet and some lovely jazz touches and a Van Morrison-worthy vocal.  A collaboration with The Hackles, "Four Leaf Clover" has been featured on a couple earlier albums, though it's never sounded so complete as it does here, with its brief flares of electric energy.

Of course, Another Burn On the Astroturf has cast my attention to Bart Budwig's rich back catalog, contributing to my growing appreciation for his work.  In light of the strong step forward on these new sessions, I would hope Budwig and his cohorts, like Rateliff, might be able to expand their spotlight eastward from their northwest stronghold. There is already a steady-rolling wave of attention from a number of worthy music blogs like ours, perhaps brought on by the Fluff & Gravy label's trustworthy track record.  With a little help from his friends, there's some hope that Bart Budwig won't be feeling like one of the average people for too much longer.


... and exhale.  It seems the rusty ol' music release engine has kicked into gear after giving us all a scare during the holiday season.  Our own 2020 tally, A Routes & Branches Guide To Feeding Your Monster, is once again growing nicely, thank you.  This week saw more than twenty records added to the ranks.  We'll highlight just a handful.  Having added a very good Kelsey Waldon to their ranks in 2019, John Prine's Oh Boy Records launches into the new year with what promises to be a terrific contemporary folk project from California's Tre Burt.  More than five years after her stellar Indian Ocean, Frazey Ford will apply her game changing voice to U Kin B the Sun, on Arts & Crafts Records come February 7.  With his Night Sweats, Nathaniel Rateliff made some unholy racket with two CDs of rock 'n soul.  Those of us here in the Fair Square State remember when the man was a softspoken solo artist.  Rateliff will set his epileptic dance moves on the back burner on Valentines Day, when he shares And It's Still Alright via Stax.  There's a new red dirt/Texas country supergroup on the horizon.  Set March 6 aside in order to dig into the self-titled debut from William Clark Green, Flatland Cavalry's Cleto Cordero, Josh Abbott and John Baumann - collectively performing beneath the marquee as The Panhandlers.  Country super-writer Brandy Clark has tagged the same day for the release of her long-awaited Your Life Is a Record.  And consider us eager to get our ears on Walking Proof  (New West, Mar 27), the fourth full-length in a series that has seen Lilly Hiatt growing by leaps 'n bounds.  Here we go with your weekly ROUTES-cast: