ROUTES & BRANCHES
featuring the very best of americana, alt.country and roots music
... that review I was talking about
Scott Foley, purveyor of dust

As you might expect from the header, 2020's R&B playlists have continued to showcase our trademark blend of americana, alt.country and roots music.  It's what we do.  But perhaps dedicated participants have noticed that it's been quite a span since we devoted our review space to an un-hyphenated country record.  We've had alt.country, country-soul, country-pop, and just about every other prefix and suffix imaginable.  We just haven't dedicated the space to a capital-C country record. 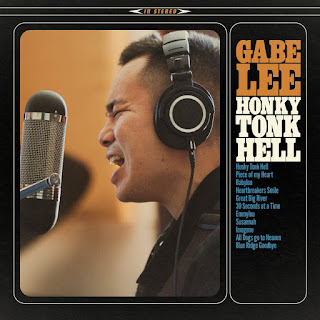 Part of that is because, as a blog that promises the skewed musical vision of Scott Foley of Longmont, Colorado it's bound to follow whims.  Just like my own compromised musical attention span, R&B fits nervously between the generous parameters we've drawn.  And tbh I don't want to be ghettoized as just one thing or another.  Just an americana blog or ... whatever.

Which brings us to our first true country review for 2020.  We came across Gabe Lee's Farmland CD in the midst of the innocence that was Spring of 2019.  We were superficially intrigued by the record cover and by the title during one of our frequent wanders through the web.  What began as a flirtation with the Nashville native's acoustic singer-songwriter country evolved into a full-on commitment, landing several of the record's tunes on our weekly ROUTES-casts.

In short order, less than a year, Gabe Lee has delivered his second album, Honky Tonk Hell via Alex Torrez' Music Group.  And we're happy to confirm that the promise and the originality of those earlier songs are compounded on this second set.  Of course, one of the more direct appeals of Farmland was in its spare and honest arrangement.  "Eveline" and "Alright OK" were simply well-told stories set to acoustic guitar and not a lot else.  While much of the same team behind Lee's earlier success share the grooves for Honky Tonk Hell, they're certainly striving for a larger sound, a more confident collection.

That corps features producers David Dorn and Alex Torrez, as well as dobro and pedal steel maestra Lucciana Costa from King Margo.  And it won't take long to find that bolder approach once your needle hits the record.  Cowritten with Southern rock 'n blues guitar phenom Marcus King, "Honky Tonk Hell" is a take-no-prisoners romp unlike anything on Farmland.  In Lee's own words, it's a Lynyrd Skynyrd Rolling Stones vibe gospel-y influenced Southern rock bathed in whiskey kind of deal like dumpster fire gasoline raging sort of mentality.  With its fiery guitars and pounding drums, the song's arrangement is complimented by the writer's most bold lyric to date, damning a disreputable venue with Seats reserved for all the folks down in Nashville / For writin' phony-ass country songs.

On that debut CD, Gabe Lee established himself as a lyricist deserving of a close listen.  He's as likely to perfectly capture a poetic image as he's capable of a wry and irreverent turn of phrase: Bumped into Jesus at a diner / Where he was blessing a bowl of mac 'n cheese.  The striking "Emmylou" offers: I can see the tattoo on your shoulders / Every night that mockingbird / Still haunts my dreams.  It also features the classically trained Lee on a rare piano composition.

Lee's vocal delivery cements him securely in the country tradition, even as his high nasal voice sounds like nothing on the contemporary country charts.  He reveals soulful shades to his performance on songs like "Heartbreaker's Smile" and the gospel-tinged "Great Big River".  The latter incorporates some great horns along with organ and piano which appear throughout Honky Tonk Hell:  So if you're an angel / Won't you shine your little light over me / I'll be wearing all the clothes that I got / Washing dishes in the belly of a restaurant.

Lee has acknowledged that some of these new tunes were written simultaneously with those on Farmland, if not earlier.  "Piece Of Your Heart" wouldn't be out of place on that earlier set, featuring Lucciana Costa's terrific string work that raises the bar throughout Honky Tonk Hell.  But more typical of his fuller approach is "Babylon", an americana piece composed with fellow songwriter Vinnie Paolizzi.  "Susannah" brings us full circle with another Southern rock burner riding on a strong piano line: Could you help a good and honest man / Revive a broken body of steel.

It's definitely not that there haven't been other worthy capital-C country records in the first several weeks of the year.  Thinking here of James Steinle, Brandy Clark or that terrific Ashley McBryde that's just around the corner.  But credit Gabe Lee and co. for a collection that's enough of an eye-opener to demand our review attention - even amidst the rattle of our current distractions.  The one-two roundhouse of Farmland and Honky Tonk Hell serve as a tantalizing and wide-ranging introduction to an artist whose talent is already head and shoulders above most other young country artists.