JOSHUA RAY WALKER - GLAD YOU MADE IT 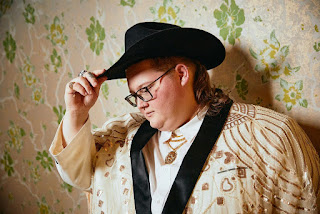 I'm not giving away any secrets by saying that sorrow is a key aspect of country music.  It's common knowledge that the genre is fueled by melancholy, disillusion, tragedy, darkness, heartbreak, loneliness and life's little disappointments.  In the process of turning much of country music on its head, the mainstream expression has largely lost that thread of sadness.  Curiously, listeners currently seem to gravitate more towards songs about good times.  I suppose this is alright, but it's not where Joshua Ray Walker comes from.

On his 2018 debut, Wish You Were Here, the Dallas resident introduced himself on one of that year's strongest songs.  From "Canyon": I'm a big big man / Not just in size or in stature / In terms of space that can't be filled / I'm a bottomless canyon / Without a drop to spill.  Walker delivered these lines and others on the record in a voice that has known sorrow, a high and lonesome yodel that borrows as much from his grandfather's bluegrass record collection as from country classics and new traditionalists.

Walker has appropriately called his follow-up Glad You Made It, gathering producer John Pedigo and a roomful of the same collaborators behind that first collection.  And in the tradition of "Canyon", he introduces his new album with an absolute gut punch:  I might put this truck in neutral / Let it roll into the lake / First I'll finish off this bottle / So it looks like a mistake.  "Voices" launches his heartbreaking vocal from a haze of pedal steel, a vibe that translates perfectly to the video's David Lynch-ian tableau, portraying Walker staring down the camera in the company of several of the characters from the CD's other stories.  It's an indelible image.

Whereas Wish You Were Here was populated almost entirely with these weepers and wrist-slasher ballads, Glad You Made It takes the deliberate step of leaning into the tempo a little more, generating sounds that would translate to a more electric stage show.  Which doesn't mean the propulsive "True Love" parts the clouds even as it invites listeners onto the dance floor.  With its see-saw fiddle and tumbling drums, the song stays true to Walker's somewhat jaded spirit: We won't grow old together / Holding hands when your hair turns gray.  And later: You just want what / You can't have / Lonely ain't that bad.

One constant from record to record is Walker's facility for conjuring characters who populate his land of fractured dreams.  The center of attention, the titular "Boat Show Girl" stands with her eyes fixed on the distance Like a redneck Statue of Liberty.  A lazily lilting accordion gives the song a Border flair.  She's a sympathetic subject, as are many of these down-and-outers.  Give me your tired, your poor / Your huddled masses waiting on the shore, Walker sings.  May you board this fiberglass vessel / And not feel empty anymore.  See also the rocking "DB Cooper", a monster guitar and Frankenstein organ adding new textures to the artist's sound.

The most interesting character on Glad You Made It might be Joshua Ray Walker himself.  The writer has acknowledged that while most of his songs aren't autobiographical, there are aspects of his own story throughout.  With is brassy horns and big band bounce, "User" might be the most upbeat ode to recreational substance use we've had in years:  Think I'm gonna use again / It's been a long long time.  The tune also serves to remind us that Walker may plumb the emotional depths, but he's rarely self-serious: Some say I'm addicted / But what do they know / It's not a struggle if you don't fight.  Seeming like a long lost Dire Straits track, "Cupboard" follows the narrator's reverie about our perception of time, triggered by expired dry goods in the pantry.

An accomplished multi-instrumentalist, Walker has served his time in small Texas clubs, as well as with bands like Ottoman Turks (who are presently wrapping up a new record).  But it's his vocal expression that is showcased on his new collection, an instrument that falls somewhere between the country twang of Dwight Yoakam and the keening hurt of Austin Lucas.  And that range is on full display with Glad You Made It, from the elastic, echoing yodel of "Loving Country" to the 'grass-strained "Play You a Song", with the repeated refrain, Sometimes it feels like / I can't do much else right. You won't hear any complaining from our side of the bar.  Joshua Ray Walker has played his cards wisely, with the release of this second album that both fulfills the promise of his debut and extends his rich musical vision towards future possibilities.

A Routes & Branches Guide To Feeding Your Monster is what we call it.  It's our way of keeping track of albums that have been announced by artists that we follow.  We're adding to the thing daily, but each Episode we'll stop down to mention just a couple more newsworthy entries.  Bass Player To the Stars Ted Russell Kamp, f'rinstance, will be releasing his next full length, Down In the Den, on July 24)  Seth and Scott Avett are adding to their celebrated Gleam series, planning to debut Third Gleam on August 28 (Loma Vista).  Matt Woods will be sharing an EP's worth of material recorded during last year's Natural Disasters sessions.  Expect Mornings After wherever music matters on September 4 via Lonely Ones.  We've been singing the praises of Bandcamp lately, and this past week the site was packed with great new releases, owing to the fact that they had waived the artists' fees.  Water Liars, for instance, were selling digital downloads of Roll On, their last unreleased sessions as a trio before Justin Peter Kinkel-Schuster and Andrew Bryant departed for solo careers.  There's also a sprawling covers collection coming together under the moniker Cover Charge: North Carolina Artists Go Under Cover to Benefit Cat's Cradle.  Due in full July 31, the collection features NC artists such as Chatham County Line, Iron & Wine, Sarah Shook and many more, with all benefits directed towards the survival of the celebrated music venue.  Your weekly ROUTES-cast, of course: