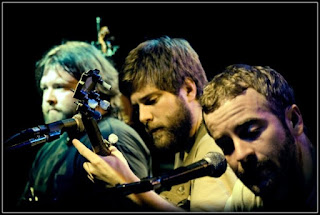 2010's year-end favorite songs list featured some great stuff, not the least of which was Trampled By Turtles' epic "Wait So Long", fiddle and banjo chugging along at a breakneck pace, daring the listener to hang on for the ride.  The Minnesota boys' new Stars and Satellites album steps back from this sort of rave-up for the most part, but still deserves to be TBTs' Avetts or Mumfords moment.  Taken as a whole, it's a much more mature effort, featuring soul-searching songwriting and relatively restrained playing behind almost melancholy lyrics.  The band's harmonies are polished to a beautiful precision as well.  All of which is impressive for an album recorded all but live in a remote Minnesota cabin.  Concertgoers will still leave their seats for the "Wait So Long" and "Think It Over" moments, but more introspective tunes like "Alone" and "Widower's Heart" deserve at least as much response.  Trampled By Turtles have established themselves as something more than "that speed grass band".

Also this week, former Mammals Mike & Ruthy return with a surprisingly varied EP,
including their take on an incomplete Woody Guthrie lyric.  Bad Livers cofounder Mark Rubin returns with his sharp new Atomic Duo project, heralding back to a time when political music was clever, angry and eloquent.  And the Mastersons, touring members of Steve Earle's Dukes & Duchesses, step into the limelight with a strong first effort that might bring to mind other pairs like Buddy & Julie or even John & Exene.