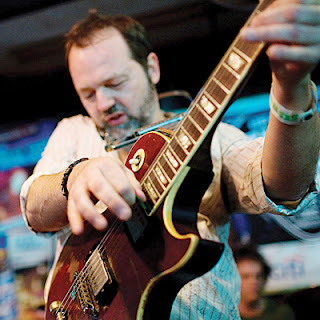 While I've given the album a couple spins by now, Cary Hudson's Mississippi Moon CD has been somewhat of a victim of Thin Case Syndrome, disappearing in my box of musical wonder because of its lack of a spine.  This means that when I'm scanning the discs I've brought with me it's been largely overlooked.  This is a travesty, since it's Cary Hudson's strongest effort outside of his Blue Mountain material.  His fourth solo project, Mississippi Moon was recorded solely during full moons at Jimbo Mathus' magical Delta Studios in Como, MS.  Like much of Hudson's work, it's largely inspired by the landscape, people and music of his home state.  Like much of the independently released music played on R&B, it's deserving of a much wider audience, and would surely garner that if were on a larger label.  Incidentally, a couple years ago, Gibson assembled a list of their "Top 10 alt.country Guitarists":

Also crawling onto this week's Episode are promising early tracks from forthcoming releases by Mindy Smith and Sara Watkins.   After exploring a more pop territory, Smith seems to be settling somewhere closer to her americana roots, while Watkins' sound seems much less acoustic than her powerfully quiet solo debut.

Don't forget to tune into my Thursday Morning Mix shows, from 10am to noon every week.  While it strays from the vision of R&B, music lovers should enjoy good music wherever they discover it.  Playlists are on the station's website http://www.krfcfm.org