First thoughts here:  I need to hire a secretary/assistant to transcribe my playlists to my blog.  You'd think with the time I have that I might be able to set aside a moment or two earlier in the week to accomplish this.  But you'd be incorrect. 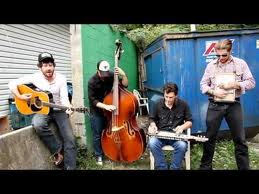 Second thoughts:  After doing some focused research and devoted listening to the work of Gretchen Peters, I'm increasingly looking forward to our instudio chat on Thursday's Morning Mix program (likely around 11am).  Peters is an uncompromising writer and a relatively unheralded singer as well.  She'll reportedly be bringing her longtime keyboardist Barry Walsh (who will probably bring an accordion, since the station has no keyboard and it's really hard to push a piano all the way down College).

Third thoughts:  You probably won't beat Hellbound Glory for angry young outlaw music these days (they call it "scumbag country", altho that doesn't go over so well with the mainstream folk).  Their Damaged Goods was released late last year, though I just received my copy, so we'll have some catching up to do.  Like my favorite album from last year, Lydia Loveless, Hellbound Glory offers well played and very well written songs, with solid ties to true country music.  A video on their label's website shows the quartet performing "Bastard Child" in front of a large dumpster, the sound of trucks and traffic frequently competing with their music.  Another video finds Hellbound Glory arrayed on a concrete structure overgrown with weeds, beers at their elbows, the lap steel player with a cigarette between  his picking fingers.  In both videos, their utility man Zeke sits with a washboard around his neck, though he never plays a note.  This is great stuff.

Finally:  While the playlist is not presented here, I had a great time sitting in for Andy on Roadhouse Radio.  I committed to an "alphabet show", wherein for each letter of the alphabet I select one artist.  Problem was, most of the tunes played were under 3 minutes, so I ran out of alphabet by the 90 minute mark ...  If you'd like to peruse the playlist for my Roadhouse Radio stint, I'd direct your attention to the station's website, http://www.krfcfm.org

Finally, also, beginning with this Episode, I'm undertaking the process of tagging every album debut on R&B.  Henceforth, when an album is played for the first time, this will be indicated with a big ol' letter "D" following the citation.