On R&B Departures, I connect fleetingly with some of the artists who I represent on my show.  Today, we have the opportunity to thank Sid Griffin for largely inventing alt.country music.  Way back when I was in high school completely ignoring any album without a black cover, Griffin and his Long Ryders were adding a harder edge to the music of the Byrds and Flying Burritos on seminal albums such as Native Sons and State of Our Union. 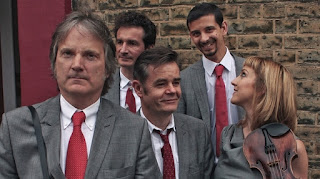 These days, Griffin resides in England, where he has worked with the Coal Porters since 1989 solidifying their "alt.bluegrass" sound.  Find the One marks the band's 10th album, featuring a wealth of originals as well as a couple unexpected covers.  Griffin and co put their distinctive spin on the Stones' "Paint It, Black" and Bowie's "Heroes".  As one of my very favorite songs of all time, it's proven easy to ruin "Heroes", as evidenced by a lifetime of failed attempts.  I'm pleased to say that the Coal Porters have bucked that distressing trend.

Sid Griffin's answers to our Departures questions reveal his very present connection with the past, as well as a well-placed reverence for what's happened since.  Thanks to Sid for offering this glimpse into his musical inspiration!

Favorite Music As a Youngster: The Chipmunks Sing The Beatles LP (1964)

Appalachian Swing! - the Kentucky Colonels
Let It Be - The Replacements


Best Concert You've Seen:
the Everly Bros reunion in 1985 at The Greek Theatre in Los Angeles...I even got their autographs...

What's In Your CD Player These Days:
Live 1969-Raw Blues! by Magic Sam (I got it yesterday)