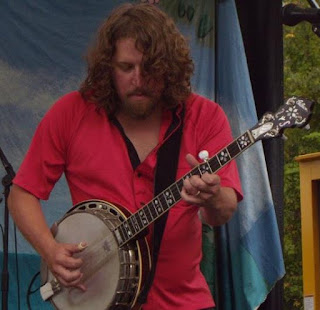 From Vermont via Boston, Bow Thayer plays his brand of "mountain soul" with 20 years of experience under his belt.  His new retrospective, Hindsight: 1995-2012 catches us up with the bands and sidemen with whom he's played during his tenure.  In addition to more recent cuts from his present band, Perfect Trainwreck, Hindsight reaches way back to tracks from earlier acts such as Elbow, Jethro and Benders.  The constant throughout is Bow Thayer's gruff but soulful voice, alternately carrying blues, rock, country and americana with soul to spare.  Especially revelatory are Thayer's earlier works, which are largely unheard even by fans, as well as a recent song recorded with Levon Helm (see below for further connection).

As luck would have it, Bow Thayer sent the following answers to the Departures questions, giving us a glimpse at the inspiration behind Thayer's own inspiring music.

Favorite music as a youngster: Stones, Zep, Dead, Beatles, the Band…. not very original but thats what I liked! Did not  dig all the 80's stuff.

Lyric you wish you had written:  "I come from an abundance of inherited sadness"  - Ryan Adams

Best concert you've seen:  Levon Helm's Midnight Ramble, of which I was lucky enough to open for 6 of 'em.  The one that sticks out the most is when Levon sang "The Weight" for the first time in almost 20 years.  Not a dry eye in the place!

Be sure to catch Sat 10/20's Episode of Routes & Branches.  Ronnie Fauss will drop by during the 4:00 hour to chat about his fine new album.