It's seemingly been months since we first set ears upon the first tune from Tin Horn Prayer's Grapple the Rails album.  "Stumble" showed promise at which the Denver band's Get Busy Dying only hinted.  Weeks passed, during which I would occasionally bother the band with an email, not entirely unlike the small child who is repeatedly asking, "Are we there yet?!" from the backseat of the station wagon. 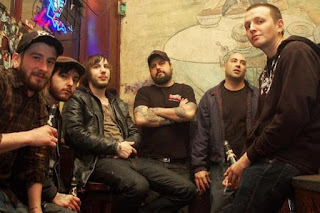 So now we're here.  Grapple the Rails has dropped, and it's certainly worth the wait.  Of course, very little on R&B is as loud or as in-your-face as Tin Horn Prayer - I would file them alongside bands like Devil Makes Three or Legendary Shack Shakers.  It's telling that the majority of pieces I've found about the group over the years have stemmed from punk blogs.  Bandleader Andy Palmer wrote a piece last week praising "10 Songs That Made Me Fall In Love With Punk", shining light on bands such as Hot Water Music and Replacements. There's no denying, however, the roots element of Tin Horn Prayer, from the rhythms to the accordion or the banjo here and there.  The razor-gargling vocals certainly don't detract from the group's punk reputation.  On their Facebook page, the band qualifies itself as "indie/folk/punk/bluegrass" but I would simply settle for calling it one of the most relevant bands in the state.

Speaking of which, I've pared my favorite songs list down to 26 at the time of this post.  Those tunes have been dropped onto a playlist with which I'll spend a couple days before settling the list into its final form, to be unleashed during my December 15 R&B Episode.  Albums happen next, on December 29, with indie/rock faves on my December 27 Thursday Morning Mix, and my favorite Colorado music ushering in 2013 on January 3.