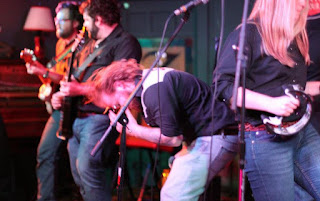 I'm not a drinking man, but I play songs about drinking on my radio show.  Frankly, it'd be hard to avoid when spinning two hours of americana, alt.country and roots music.  Without paying attention, I played no fewer than six outright drinkin' songs this week (and surely at least twice that many where imbibing at least makes a guest appearance).  Nothing wrong with this - I don't refrain from drinking for moral reasons, just like I don't deliberately avoid drinking songs.  Heck, the show that follows mine, Andy D's Tarnation, is almost wholly fueled by the stuff!

From Kearny, NJ, the band Secret Country is certainly doing their part.  We take an inaugural sip of their sophomore full-length album, From the Barroom To the Bedroom, just poured from the decanters of Killing Horse Records.  Having weathered a bit of personnel adjustment, Secret Country has retired the fiddle from their earlier recordings and welcomed co-vocalist Katelynn Siegle, who shares the mic with Jay Monaco.  Their new songs boast titles like "Drinkin' Mood", "Sidepiece City" and "Night of Whiskey", the latter of which prompted Tarnation's Andy D to ask, "Is this the theme to Friends?"  Indeed, Secret Country's new music does demonstrate a new commitment to both the speed and recklessness of punk and the catchy melodies of pop.  By way of dedication, the band raises a spirited toast:  "Secret Country would like to thank whiskey, hot dogs & you".