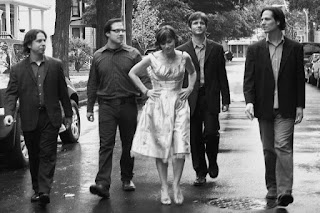 I believe I was able to see my breath in the studios during this week's Episode.  Driving home, the blowing snow made the roads somewhat difficult to see, and I had to keep a window cracked in order to prevent windows from steaming over.  That, and I listened to the Broncos drop a near sure thing to the mighty Joe Flacco and the Ravens in double overtime.  While I recognize there's a certain amount of tragic irony in Manning's loss, I'm not heartbroken since I tend to root for the Bucs (who have broken my heart on a near yearly basis since 1976 (with the notable exception of 2002)).  We are officially in the deep midwinter.

Which doesn't mean there's no new music to enjoy this week.  Returning from a six year absence are Steve Dawson and Diane Christiansen, aka Chicago's Dolly Varden.  Their music blends the pastoral sensibility and harmonies of Over the Rhine with the true melodic sense of early Jayhawks.  The group's earliest albums were actually released around the same time as Jayhawks' classic material, and their lineup has basically remained the same since those first days.

Also this week, Winston Yellen spent much of his youth in Colorado Springs.  Now living in Tennessee (in a house previously occupied by Johnny and June), his first album as Night Beds will be released soon on the Dead Oceans label.  The easy and frequent comparison is to the harmonies of Fleet Foxes, though that's like comparing any female alt.country singer to Lucinda.  Sticking to the indie side of things, North Carolina's Mount Moriah will be releasing their sophomore album in a couple weeks.  Heather McEntire and Jenks Miller come from a much darker background of punk and metal, though their debut featured backing from rootsy sorts like Megafaun and Bowerbirds.  Our first glimpse into the new album is a promising one.