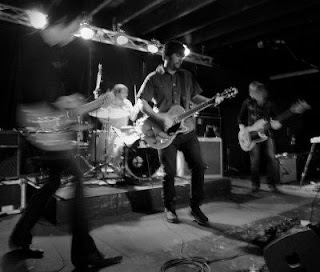 Programming help on the first hour of this Episode was provided by Charles Hale, who joined me in the studios to chat about the Nine Bullets weblog to which he contributes.  Charles brought along some of the new music he's been enjoying recently, much of which he reviewed for Nine Bullets, one of my favorite blogs for this kind of music.  Charles emailed me a couple weeks ago saying he was a fan of R&B and that he had relocated to Fort Collins.  He is presently undergoing rigorous around the clock training in hopes of becoming an on-air programmer for KRFC.

Sometimes when I'm trying so hard to find the next Best Thing Ever, I forget that there's still some fine music being made by folks who have been around the block several times.  This week brought new arrivals from Son Volt and Emmylou Harris & Rodney Crowell.  Jay Farrar and co. admit that their new album isn't "honky tonk" per se, though it borrows in spirit and sometimes in form.  Honky Tonk is a definite departure from the band's darker, more electric fare of late, demonstrating a brighter acoustic sound that can be refreshing.  Piano and pedal steel carry the tunes throughout, as well as Farrar's vocals which seem relatively more relaxed.

Harris and Crowell are musical partners from way back when he served as part of her Hot Band more than 35 years ago.  In addition to four new Crowell compositions, the pair duet on tracks originally by Roger Miller, Matraca Berg, Hank Devito and others.  The years passed only add to the poignancy of these recordings, their respective voices weaving together so elegantly.  The album's cornerstone is a recording of "Bluebird Wine" which Crowell originally penned for Emmylou's 1975 solo debut.

While I'm certain I'll become somewhat jaded as other programmers make these albums among the most played of the year on KRFC, today as I'm sitting at the window watching the snow pile up it seems like just the thing.