As I sat down to write about this week's Episode, I came across a Facebook post from Colorado artist John Statz, noting the passing of singer-songwriter Jason Molina this past Saturday.  Curiously, I had brought along a Magnolia Electric Co. album to spin this week, but didn't get around to it.  The post on his band's website reports that Molina died at age 39 of natural causes, but had suffered from the consequences of severe alcoholism for years.  I've followed his music since his Songs:Ohia days, into his Magnolia Electric Co. albums and his solo work.  One of my most prized musical possessions is MEC's 4CD Sojourner box set.  Still, there are few more lonely sounds than Molina's solo work, his mournful voice and bare acoustic picking almost too intimate for comfortable listening, something I loved but only aired a handful of times.  Certainly the voice of a haunted man. 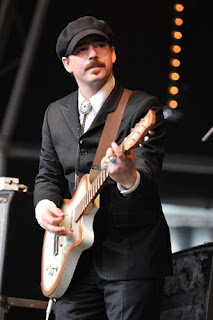 As a fan of Jason Molina, Mark Kozelek, Joshua T. Pearson, J Tillman and others, I am frequently told how "depressing" some of my music is.  My usual response is to say that the only depressing music is poorly made music.  When an artist seeks to elicit genuine emotion and is successful in doing so, there's nothing depressing about it.  Jason Molina's work was in fact dark and frequently downbeat, but it was an honest expression of his psyche, and it reached the hearts of appreciative listeners.  The Magnolia Electric Co. website closes its brief piece with a lyric from Molina's "Hold On Magnolia":

Hold on, Magnolia, I hear that station bell ring
You might be holding the last light I see
Before the dark finally gets a hold of me

Hold on, Magnolia, I know what a true friend you’ve been
In my life I have had my doubts
But tonight I think I’ve worked it out with all of them

I'll certainly play some of Molina's music this week, both on my Thursday Morning Mix (10-noon MT at KRFC) and on R&B.  And we'll get back to writing about great new music by then, too.  Next Saturday, we'll also have 3/7 of the fine Colorado group Paper Bird in the R&B studios for a chat about their new album, Rooms.

The Longest Day of the Year said...

I love that Ben Hanna CD! Thanks for giving him a spin!