Sometimes you just know.  Sure, it still stands that you can't judge the proverbial book by its cover.  Having been a bookseller for the majority of my vocational existence, however, I would argue that there is a caveat to this trope.  While the cover can't ultimately divulge the quality of the contents, you certainly can sell that book based upon its cover.  I browse countless websites every day, and I come across scores of unfamiliar artists.  I do this with iTunes as well, and will sometimes stop down to preview a release if I like the cover or the band name.  Call me superficial. 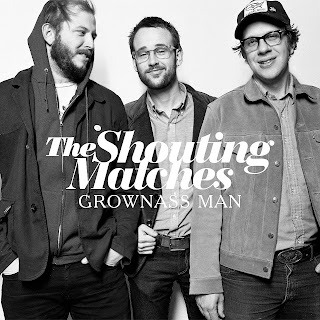 I recently clicked on an album cover featuring a trio of unassuming gents who looked like they were enjoying themselves.  The selling point was that the album was called Grownass Man.  "Yes.  I will like this," I said to myself in an eerily prescient fashion.  And lo, like it I did.  Rootsy, loose, distorted and beards:  I'm apparently a sucker for this volatile combination.  It was only when I looked further into the Shouting Matches that I learned that one of the covermen was none other than indie darling and Bon Iver frontguy Justin Vernon.  While Grownass Man reminded me not at all of Bon Iver, in retrospect it did trigger memories of Vernon's earlier work with deYarmond Edison, members of which went on to become Megafaun and Field Report.  I regard dYE's sole album, Silent Signs, as an overlooked alt.country gem.  With the Shouting Matches trio (one of the guys hails from Peter Wolf Crier), Vernon's music is even looser and more upbeat, boasting the fuzz and wah of Black Keys and the soul of Los Lobos at times.

Also on this week's docket we explore a new offering from Oregon's eclectic David Jacobs-Strain (who I first witnessed as a preteen wunderkind) and a really sweet 3-tune EP from Lucero's keyboard wizard Rick Steff (featuring the guys from Lucero as his backing band).