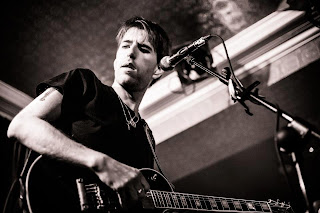 One of the more curious albums from 2006 paired veteran avant Bob Frank with young Mississippi roots rocker John Murry.  Named World Without End, the cowriters penned rather traditional murder ballads that happened to be about more contemporary slayings.  Several months ago, Murry released his debut solo album, an even more harrowing affair called The Graceless Age.  Initially only available in Europe, upon first hearing praises for the record I said my prayers in hopes Murry would allow folks on this side of the pond a listen.  Depending on the interview, Murry tells fascinating stories of his young life:  He is a close relation to William Faulkner (whose long-ago recorded voice crackles behind one tune); he died of an overdose in San Francisco only to experience his own Lazarus moment of rebirth.


Saran wrap and little colored balloons. A black nickel. A needle and a spoon.
You tell me this ain't what I am but this is what I do to warn your ghost away.

Luther Dickinson's high praise of Murry's collaboration with Frank is spot-on for the intensely personal songs on his debut:  “The lost cry out in song. Cold as an assassin's blade. Burning with the heat of a pistol's breath. Dark and deep as the grave. This recording is timeless as death. It will haunt your dreams and follow you down the shadow-filled street just out of sight."  Murry sings in a slurred baritone that resonates on a level somewhere between the junky hymns of Alejandro Escovedo and the American mythology of Springsteen.  But this is far from your grandpa's americana.  Some songs are almost unbearably sparse, with others slogging through thick levels of feedback, gospel backing vocals and the mumble of barely audible conversation.  World Without End's success lies largely in the beauty that frequently shines through the cracks of these bleak stories.  Murry admits that he is largely influenced by the literature of Faulkner and others, and that touchpoint is evident from start of finish here.  Whether these are intensely personal recollections or the ghosts of an overactive literary imagination, John Murry's Graceless Age is anything but.