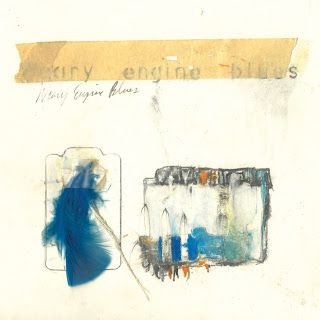 Small Savannah, GA, record label Graveface has issued a 2-CD tribute to the work of the late Jason Molina, available now for sale as a physical album (on their label page) or download (on their bandcamp page).  Friends and admirers crowd these gems, featuring offerings from Mark Kozelek, Will Oldham, Brown Bird, Will Johnson and more.  Named Weary Engine Blues after the Molina print that serves as the collection's cover, all moneys from the album's sale will reportedly be donated to Molina's family to help cover medical and funeral expenses.  The tribute was apparently underway prior to Molina's passing, inspired by news of the songwriter's failing health.  Like many other fans, I have spent much of the past couple weeks in the company of Jason's recordings with Songs:Ohia and Magnolia Electric Company, rediscovering the very subtle brilliance of these songs.  While I don't think Molina's passing will spur a Townes Van Zandt-like revival, a widespread dawning of awareness of is work, Weary Engine Blues serves as a surprisingly eclectic coda for folks who are already fans.  We'll begin our own exploration of the discs on this Saturday's Episode of R&B.

From NPR's Stephen Thompson:  "That lingering thread of hope which survives in Molina's music is what I try to embrace in his music; it's the idea that the singer lived to process his hurt and put it into all the beautiful, meaningful songs he could while he still could. I never thought a day would come when Molina's music could get any sadder, but here we are. I'll still celebrate it — and still find warmth and comfort in its worn, weary grace. But it hurts like hell that he's gone."