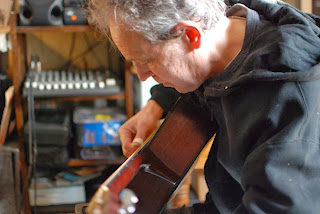 Thanks to Til Willis & the Erratic Cowboy (basically Til and Binkley) for bringing a bit of Lawrence, Kansas to the R&B studios this week.  You can check out Til's facebook page for a live 'n electric account of their Swing Station set later that evening.

By definition, compilation albums are pretty hit-and-miss.  Every moment of "wow!" tends to be balanced out by a "what?" or two.  Three new records featured on this week's Episode buck this trend, offering deep and rewarding collections to break up the end-of-the-year where-is-all-the-new-music blues.

On Fat Wreck Chords is Songs of Tony Sly: a Tribute, certainly more of a contemporary punk than a
roots record but still quite a cool document.  Best known as the frontman for No Use For a Name, Tony Sly passed away last year, leaving a surprising catalog of quality tunes for his friends to cover.  Both peers and inspirations contribute, including California's Old Man Markley, Brian Fallon from Gaslight Anthem and a sweet collaboration between Jon Snodgrass and Chris Shiflett's Dead Peasants.  I've always believed in a certain camaraderie between certain strains of alt.country and punk music, and this album lies comfortably along that line.

Completely on the other side of the equation is Divided & United: Songs of the Civil War, which stakes its claim with a more acoustic, folk-oriented lot. This is largely because alt.country wasn't yet invented around the time of the Civil War, and the tunes on this 2 disc set were all written over 150 years ago.  The artists represented weren't around either, and acts like Shovels & Rope, Chris Stapleton and AA Bondy treat the songs like contemporary pieces.  This is balanced out by Ralph Stanley, Loretta Lynn and Cowboy Jack Clement who just might've been around back in the day ...  Divided & United brings to mind the 2007 Songs of America project, helmed by the great champion of americana, Janet Reno.

Somewhere in between lies one of the strongest collections of 2013, Songs For Slim: Rockin' Here Tonight from New West.  I've been airing tunes off this compilation since early in the year when the label began releasing them as monthly singles to raise money for the continuing treatment of the Replacements' Slim Dunlap.  Dunlap himself penned the vast majority of the pieces covered on this double-disc collection, a bit of a revelation for those of us who weren't following Slim's post-'Mats production.  There are some excellent punk-roots-rock tracks here, covered by a mix of former bandmates (the Replacements themselves, Chris Mars), New West label folk (Steve Earle, Lucinda Williams) and admirers (Jeff Tweedy, Craig Finn).  When I first began playing the singles that make up the majority of Songs For Slim, I remember commenting what a stellar full-length they would make.  Thanks, New West, for doing the right thing.