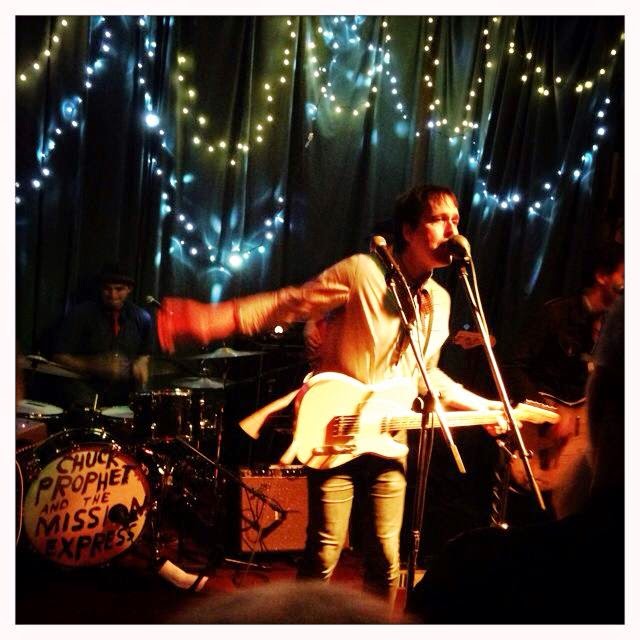 Why isn't Chuck Prophet more of a household name?  Like Alejandro Escovedo (or, I'd argue, Lou Reed or Steve Wynn), Prophet's music is distinctly urban, telling stories about his beloved San Francisco that strike a perfect balance between grit and glam. Since his days in Green On Red with Dan Stuart, through his stints with Lucinda Williams, Warren Zevon and as a longtime collaborator with Escovedo, he's written songs to rival more celebrated acts like Peter Case or even Alex Chilton.  My life is an experiment / That doesn't prove a thing.  On his thirteenth solo record, Night Surfer, Prophet is joined on guitar by Peter Buck on 14 more songs that so skillfully incorporate just the right amount of twang with his perfect garage pop.  "You could be my savior / I could be yours too".  "Laughing On the Inside" could be the perfect lovechild of Big Star and Springsteen, while Richard Thompson might've written "Ford Econoline" if Prophet hadn't reached it first. "Sing a broken melody / Bring all your troubles home to me / You can tell me anything at all".  At this point in the game, I don't expect Night Surfer's little masterpieces to show up on my Sirius XM feed.  I certainly wouldn't mind seeing a couple other bloggers throwing praise Prophet's way.

Also on this Episode of R&B, the first glimpse at Jerry Lee Lewis' October album is unexpectedly relevant (I look forward as well to his October memoir, cowritten with Rick Bragg).  With their long beards and penchant for Appalachian punk, I've taken an immediate liking to the New West debut of Joplin, Missouri's Ben Miller Band.  And have I gushed yet about Otis Gibbs' remarkable new collection?  Oh, and here's one for your calendar:  We'll be visiting instudio with Drew Kennedy on Aug 9, celebrating the release of his double live record.