My wife keeps a playlist of songs to which she'll exercise on occasion.  They're invariably upbeat and positive.  When she reads, she prefers a happy ending.  Nothing wrong with that.  My wife won't be jogging to Adam Faucett's It Took the Shape of a Bird.  Adam Faucett sings the blues like Jason Molina.  He sings like Nick Cave and PJ Harvey and David Eugene Edwards sing the blues, like music from a dark heart.  And he doesn't do happy endings. 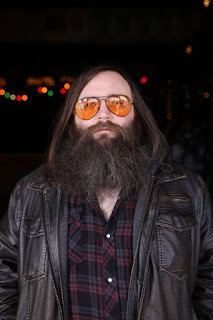 A couple years ago, Arkansas Times deservedly heralded Faucett's voice as "one of the state's most memorable and culturally significant exports".  All apologies to "aircraft, poultry, cotton, rice, graders, ammunition, organic chemicals, steel and shock absorbers", but his voice is a powerful and sometimes moving raw material, capable of bringing listeners to tears.  It's beautifully restrained on "Central Avenue", and a primal scream on "King Snake".

Fact is, Faucett could probably make a career singing simpler songs, melodic verse-chorus-verse crowd-pleasers that showcase this vocal gift.  But there are none of those cheap moments on It Took the Shape of a Bird.  Songs like "Sober and Stoned" include repeated phrases and climactic movements, but offer nothing like a proper chorus or singalong moment.  Faucett's melodies meander, and his lyrics can be cryptic:  The new king can't dance for nothing / His sad blood blue and gushing / On hordes of ex-husbands.

It's not pretty music, though it can be heartbreakingly beautiful at times.  "Central Avenue" is the album's most straightforward piece, a mournful tour of familiar haunts.  Like most of the collection, it finds Faucett working alongside his longtime backing band, Tall Grass.  Strings lift his voice above the electric guitar - bass - drums:  My last ride down old Central Ave / Who I was is who you are when you laugh / One more lap around my favorite bar / To see that it still stands at night.

The tunes borrow from blues, rock and roots, but also dip readily into the darkest folk traditions.  Faucett embodies a young orphaned girl on "King Snake", separated from her brother and abandoned to a cruel relative (find the video online for an indelible interpretation).  A heavy drum and bass beat as Faucett casts his vocal spell, howling like a backwoods Jim Morrison:  I go out in the woods / Pretend I'm with my brother / Crushing eggs as loud as we can / It's war, you're not my family.

A preoccupation with mortality rumbles throughout It Took the Shape of a Bird, whether that of the singer, a friend or a character.  "Mackay Bennett" is named for the ship that collected the victims of the Titanic, and one narrator bemoans, "If I let them take me from this ledge / It means I have climbed here for nothing".  "Dust" is one of the record's most striking moments, a passionately delivered meditation:  Some folks need God / This I never understood until I saw the dust of rock bottom on the knees of my friend / And how it was all taken from him / The world ain't clean / Put that gun down and lean on me / Let your god go and lay it on me.

This fifth CD comes four years after Blind Water Finds Blind Water, a project that brought the uncompromising artist great praise from certain circles.  It's my sense that It Took the Shape of a Bird will enjoy a similar reception, and deservedly so as Adam Faucett is a phenomenal talent.  His songs look deep into the dark of our lives, but also leave room for connection between the cracks.  He sings, "Now the good's a little stronger than the bad / If it wasn't true then evil's all we'd ever have.  And he's proven in interviews and from the stage that he's not a man without his humor.  On "Ancient Chord", possibly his most country piece, he remarks, There are bands I don't wanna play after / Some I don't wanna play before / I've played in front of a small crowd / I've played in front of a big old floor.

For my part, I neither pursue nor avoid dark content.  I tend to find myself drawn to what might be termed "Southern gothic" writing, contemporary heirs to Faulkner and Flannery O'Connor, but more for their grace with language as opposed to their haunted themes.  My perspective is that if a writer is successful in fostering a certain mood, if they're trading in honest emotions I'm along for the ride. On his new CD, Adam Faucett speaks from this tradition, and it's hard to look away.

My driving purpose behind this blog is to shine light upon music that matters.  The first R&B post happened almost exactly a decade ago - a playlist for what was then KRFC's Thursday Morning Mix.  Not a terrible one, all things considered.  That's morphed over the years as I shed radio, eventually adding a ROUTES-cast and a Routes & Branches Guide to Feeding Your Monster.

But stuff continues to evolve and grow, as it should and hopefully always will.  When I hear from folks who frequent the blog, they seem to value different things.  Most appreciate the review - intended more to draw your attention to something you should hear rather than to critique an artist's work.  Others rely on our playlists or the ROUTES-cast or the release calendar to keep tabs on what's new.  It's my sense that very few people not related to me visit R&B to hear my voice.

So I've given some thought to my R&B ROI, the time I spend cultivating the various parts of the blog and how happy it makes you and me.  And for the moment I've decided to remove my voice from the equation.  In all honesty, my voice is all over this thing.  Many folks comment that my spoken voice is very present in my writerly voice.  So I'm still here, and so is the music.  After awhile of working with Soundcloud, I've made the decision to retreat back to Spotify for the time being.

Down the road apiece, it's my intent to settle on a vehicle where I can make my home, where all these elements can coexist and forest animals of all stripes can roam freely.  Until then, almost everything on our Playlists is available thru the Spotify (tho sadly it seems JP Harris' excellent new song has yet to appear).  It also means that you'll need a Spotify account to listen to the stuff.  So enjoy this music that matters.