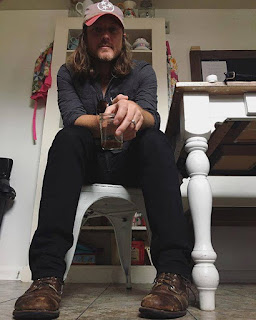 We'll start this Episode with a look back at the records that have defined the past 31 days for me.  These are my favorite CDs that were released in August.  Curiously, the list includes two Adams and four artists whose names begin with an "A" (it's pointed observations like this that bring you back to R&B).

Honorable Mention:  From a White Hotel by Hawks & Doves was officially released in late July, but it didn't come to my attention til this month.  Fronted by Kasey Anderson, it's as good as we're used to from him, but with the added energy and sonic big-ness of a full band.

Ryan Culwell's recent video for "Can You Hear Me" shows the artist doing everyday stuff with his girls (he's got four of them now).  The vignettes are interspersed with shots of Culwell looking appropriately spent and reflective.  The song, from his third full-length CD, The Last American, arrives in a whoosh of guitar and noise.  Where 2015's excellent Flatlands told the stories of the people from his Texas panhandle homeland, the songs from this new collection are broadcast like an SOS from Culwell's own Nashville backyard:  I can't breathe, I can't breathe, I can't breathe ...

It's hard to write about the American dream without giving ground to sentimentality or stereotype.  Writers learn to crib from the mythology of Seger and Mellencamp and Springsteen, who romanticize where we came from and celebrate the grit and determination that see people through "during these hard times".  With songs like "Dog's Ass" and "Fucked Up Too", Culwell's not missing the point.  The State of our Nation is bleak, and he's focused on reaching through the signal and noise to make a connection to what remains of our country.

Last American is a different album than Flatlands, with songs that are fractured and others that are shot through with anxiety.  Culwell has written of his experience since that last record, "It has become extremely evident that if I am not making music in some form, I may lose my mind".  That might be the sound that we hear in songs like "I Have a Dream" or the unhinged stomp-and-holler of "Dig a Hole".  Both serve as paranoid anthems for our me-first age, soundtracks to the fraying of our middle class fabric:  "well it ain't the promised land / goddang I guess it'll do.

The story has it that Culwell was coaxed back into the studio by collaborators Ethan Ballinger and Megan McCormick, whose guitar largely establishes the textures of Last American.  Joined by coproducer Neilson Hubbard, the ensemble succeeded in capturing and communicating both the claustrophobia and the free-falling nature of these new songs.  Like Sons of Bill's Oh God Ma'am, songs like "Heaven Everywhere I Go" show no fear in ranging beyond the usual territory of roots music.  Pedal effects, electronic click drums and generous echo lay the groundwork for a sinister piece that twice dissolves unexpectedly into a lo-fi late night radio groove.

I cherish the dark honesty of "Fucked Up Too":  "we ain't dreamed for the last ten years / we just laid real still".  That strain of wide-eyed reportage gives Culwell more believability to express hope and longing during the record's more poignant moments.  Despite it's title, "Dog's Ass" seems a very sweet, acoustic restatement of a man's commitment to his family:  "honey the dog's ass could use a little sun / if this old life don't shine / I'mma buy you a better one".  Both "Moon Hangs Low' and "Tie My Pillow to a Tree" began as lullabies to his girls, and while neither steers clear of the shadows they maintain their original tenderness.

The title track for Last American pares back much of the CD's racket for a moving acoustic take on how this American dream stuff is supposed to work:  "I got everything I asked for / on the day I turned sixteen / I got my old man's heart / and a broke down Chevrolet".  It's as close as we get to Flatland's wide-open vistas, daring us to embrace the appealing mythology of those earlier writers.  It's also a gorgeous piece of music.

Most of our parents did their best to bequeath to us their faith in the American dream.  On Last American, Culwell wonders how to do the same with his children.  How do we speak honestly and with love about the world into which they're growing?  The nights that keep us awake with preoccupation tend to outnumber the times when we feel like we're getting it right.  While Ryan Culwell's new songs offer us few comforts, it's at least heartening that he's so able to set our feelings to such rewarding music.

One of the challenges in assembling the Playlist for each week is balancing the familiar with the novel.  We're all about music discovery, but we're also about getting to know a record in a gentlemanly manner, and reminding you all about music that matters from years past.  But then we get a week like this one, where there is so much new stuff that it just throws any kind of moderation to the hounds.  Great new songs this week from Justin Wells, Sarah Borges and JP Harris.  We also let in some Clutch and a new project from Against Me!'s Laura Jane Grace.  Looking at possible reviews for the John R. Miller and Matt Hoffman's new project, beneath the marquee of New Mexican.  In all, it's just a mad rush of new music.