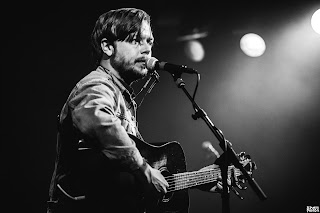 The American Dream is dead.  Long live the American Dream!  M Lockwood Porter sang on 2016's "American Dream Denied":  Left without a future, born without a past / I was always told my birthright was an ever half-full glass.  It's not a new sentiment, not something we haven't heard in the protest music of the past couple generations.  The myth of the American Middle Class that was sold to us beginning in the 1950s had forgone its promise, abandoning a generation of hardworking people to wonder when it would be their turn.

On his 4th record, Communion in the Ashes (Black Mesa, Mar 29), Porter begins from that vantage, the lost and forgotten atop the rubble of their possessions and their debts, digging through their hopes and anxieties.  The album opens with the title track, a sharp jolt of tuneful electric punk: When the bridges are all burned / Let's congregate the masses / Let's hold a new communion in the ashes.  Much of his new collection was generated while Porter was deciding to abandon his longtime Bay Area home to return to his native Oklahoma.  The cut's barbed goodbye to what had become a playground for the rich also serves as a cri de couer for our country as a whole.

On that title song, Porter bemoans we have no common hymns, then sets out to fill that void.  What results is a natural extension of the vision he began with 2014's quarter-life crisis, 27, and turned outward in 2016's How to Dream Again.  Communion concedes that "The Dream is Dead" on the CD's first single, but the response for which Porter calls is not to bemoan its loss or revive it.  Instead, he asks that we see our unshackled state as liberating:  Some have turned to hate and numbness / But I'll be marching down Columbus / Trying to build a new world with my friends.  Through chiming guitars and pounded keys, Porter and his band suggest we chart a new course.

Communion in the Ashes is ultimately a hopeful record, a project created by Porter and his longtime touring band, set to tape live in studio and played with an infectious spirit.  The realities which threatened to crush fellow Oklahoman Ryan Culwell on 2018's Last American only strengthen the resolution of Porter's "dystopian gospel band".  And while there's an element of gospel fervor to tunes like "Get Back to the Wild", the prevailing wildness owes more to punk.  Steady piano ushers in clouds of guitar fuzz on a song that's as wordy and prophetic as Lee Bains III: I know we're all born with flames inside the world wants to blow out, declares Porter, I never thought it'd take so many years to get back to the wild.  In this Eden, the constraints of civilization are stripped away, leaving us to decide how to proceed.

Even the quietest moments on Porter's new songs show signs of unraveling.  The positivity of the acoustic "Blessed to Be Alive" is shadowed by a recurring feedback and static.  The sonorous 30-second chord that finishes "I Will Do No More a'Praying" begins to sound a bit like a warning siren.  The cut's solemn piano and rattling snare belie a more revolutionary heart with hopes of a better world:  Keep planning for the day when we can spread out all the wealth / By and by, by and by ... Porter's deceptive calm amidst the storm recalls Matthew Ryan's "punk and noisy folk with a gigantic heart".

M Lockwood Porter has made a protest record with a different sort of heart.  His youthful and upbeat delivery make for an infectious call to arms.  Pieces like "Waiting For a Sign" and "This Fear Won't Control Me" can be inspiring, guitar-driven fuel to face the fire burning around us.  But where others might ask "where's mine?" Porter challenges listeners to look to "what's next?"  Our redemption song can topple walls, he promises, But first we must compose it.

It's quite the tame release date, heralding just a couple records for our kind of music.  Karin Bergquist and Linford Detweiler continue to make beautiful music together under the Over the Rhine moniker.  Their Love & Revelation offers more thoughtful, exquisite folk-rock.  Cash Cabin Sessions Vol. 3 boasts more of Todd Snider's easy-going, topical songwriting.  Next Friday, stay tuned for another auto-tuned production from Lambchop, as well as some Canadian blues from Matt Andersen.  There's a promising singer-songwriter CD from Lucy Rose, and a couple rock-oriented collections from Jenny Lewis and Strand of Oaks.  For a more detailed report of what's come out and what's coming out, click on A Routes & Branches Guide To Feeding Your Monster to your right.  New stuff  was added to the calendar this week from Dylan LeBlanc & the Pollies, Sean Whiting, Eric Bolander and more.