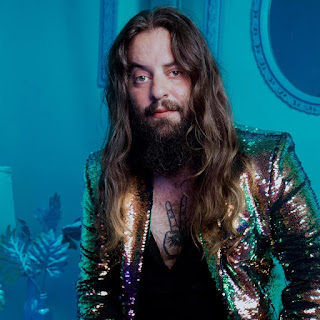 As I’ve mentioned many times, the stuff I showcase here on R&B represents only a fraction of my musical activity.  Every week I come across artists from all other genres who feed my monster even if they don’t show up on our ROUTES-cast.  If I were to cast my net much wider, however, I wouldn’t be able to represent the more roots-leaning artists to the extent I do here.  When I commit to a record, I’m committing to several songs over several weeks, exploring the CD bit by bit until it becomes more familiar.  After that, I always feel it’s up to you (the Routes & Branches listener) to decide whether to add it to your own rotation.

All this to say that damn, I really enjoy Strand of Oaks’ new Eraserland CD.  I’ve represented Tim Showalter’s music a little over the years, especially 2010’s Pope Killdragon.  But I largely passed over great stuff like 2014’s career-defining Heal.  I’ve decided to dive deeply into this new collection only because it makes sense, because it sounds great alongside some of our other albums, simply because I can’t help myself.

Eraserland arrived during a time when Showalter was contemplating closing the door on the Strand of Oaks chapter of his life.  A fortuitous call from Carl Broemel brought him back to the studio, lured by the guitarist's promise to provide 4/5 of My Morning Jacket as his supporting band.  While Eraserland's message is a starkly personal one, the collection bears the distinct sound of a collaboration between the two musical forces.

The album opens with Showalter taking stock of his lot in the midst of a depression that followed the tour for 2017's indulgent Hard Love:  I don't feel it anymore / Somehow I see clearer than before / ... The scene isn't my scene anymore / ... The more I burn the less I've got to show.  The genesis for these new songs came with a seemingly cathartic winter retreat to Wildwood at the Jersey shore.  Like Eraserland as a whole, "Weird Ways" alternates between introspective acoustic and wide-screen electric, with keening guitars and drums that recall the sounds of 80's alt.rock.  Lacey Guthrie from Twin Limb provides a vocal counterpoint for Showalter, who throws his voice to the rafters in his best estimation of Jim James.

Sonically, Eraserland walks that balance between the anthemic and the introverted, the rock star and the singer-songwriter.  Where one tune plays like Strand's Philadelphia partner-in-rock, War on Drugs, the next might counter with a more vulnerable moment.  "Wild and Willing" is a first-take acoustic number, Showalter's fragile vocal and guitar somehow barely hanging on to the shore.

The shadow of self-deprecation is cast throughout these songs, suggesting an artist who doesn't fall hard for his own hype.  "Keys" finds him entertaining thoughts of surrendering to civilian life: Man we should just run away / I'll buy us a trailer down in the Keys / I'll be that bartender with boring stories / I gotta get my shit together before I'm 40.  It's one of the CD's more organic pieces, songs that more readily betray Showalter's Midwest roots.  With melodic guitars cutting deep, "Ruby" plays like a recent Ryan Adams track and serves as the collection's loosest cut (as well as one of the year's strongest singles).

Satisfying as they are, it'd be a shame to waste the talent of one of rock music's most capable bands on simple midtempo roots rockers.  Eraserland allows My Morning Jacket ample space in which to cast their spell.  Guitars are thick and insistent, howling like an air raid siren as the title cut unspools.  A duet with Emma Ruth Rundle, "Eraserland" layers those guitars with dramatic synths as Showalter incants, I am the Eraserland / I can start again.  Dark and foreboding, "Visions" growls like a waking dragon, with Showalter wandering the shoreline awash in regret and self-doubt:  Glad it's just me on the beach / If I were you I'd stay the hell away from me.  Jason Isbell applies wild guitar to "Moon Landing", and "Forever Chords" recalls Pink Floyd's "Us and Them" as it floats on towards the ten-minute mark.  It's far from a resolution for the writer, though some peace is reached as he retreats into his thoughts:  The problem with living / Is one day you won't.

It's probably not been especially easy to be Tim Showalter over the past couple years.  Judging by Heal and Hard Love, the man who performs as Strand of Oaks has borne loss and separation, doubt and deliverance.  On Eraserland, the demons aren't necessarily exorcised, but perhaps they've been kept at bay.  Says Showalter:

Eraserland means whatever you want it to, but for me it's a place where you can be anyone you want to be, and hopefully find some peace ... The last line on the album is my hope for all of us, If you believe you can be loved / You'll outlive your past.

New stuff entered our world this week from Luther Dickinson, backed on Solstice by an array of superb vocalists, from Amy LaVere to Birds of Chicago and Amy Helm.  Jenny Lewis brings a basket of bright, primary colors on her new collection, and Lucy Rose's release features some quietly stirring indie-folk numbers.  You can save room for next week's mega-release date, anticipating Big Name Projects from Son Volt and Steve Earle, as well as welcoming M Lockwood Porter's Communion in the Ashes in its entirety (reviewed in last week's Episode).  And new stuff was added to A Routes & Branches Guide To Feeding Your Monster from Chuck Mead, Chris Shiflett, Left Lane Cruiser and another collab between Calexico and Iron & Wine.  Life's too short.  Don't cheat yourself by cutting too thin a piece of cake.  Widen your ears.