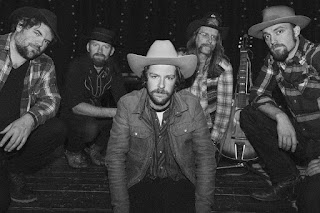 Portland’s Mama Bird Recording Co. is a boutique label, releasing only a handful of records every year.  But what a couple of years it’s been.  Haley Heynderickx, Courtney Marie Andrews.  Last month brought us Damien Jurado’s masterful In the Shape of a Storm.  Back in 2017, Mama Bird presented Wannabe, a quietly stirring solo debut from Taylor Kingman upon which I unceremoniously and gracelessly whiffed.  It’s a rough-hewn stack of songs set live to tape with Mike Coykendall and Jon Neufeld, songs that show Kingman to be a man who works wonder with words.  He had earned a reputation as a promising and unpredictable front-man for an outfit called the Hill Dogs before stepping aside to heal a vocal issue.

Taylor Kingman's return to full-band mode comes with the release of Arguably OK, credited to TK & the Holy Know-Nothings.  The jacket of their album presents a Last Supper-like tableau, with a spent-looking Kingman ringed by his band of disciples.  The ragtag outfit features an assemblage of folks from Portland's roots community, current and former members of bands like Fruition, Shook Twins, Lewi Longmire Band and more.  They christen their sound "psychedelic dream boogie", a hyphenated sub-genre which apparently incorporates a loose congregation of country, folk, rock and blues.  The guiding light for the Arguably OK sessions was reportedly cast by Terry Allen's seminal 1979 record, Lubbock (On Everything).

Fans of Kingman's earlier solo CD might not immediately recognize these sounds as products of the same musical imagination, much in the same manner as Nathaniel Rateliff's turn with his Night Sweats seemed a departure from his introspective solo work.  While they still showcase his strength as a lyricist, songs like "Desert Rose" are in service of the band's more expansive groove, largely driven by Jay Cobb Anderson's electric guitar work.  The Holy Know-Nothings are roadworn veterans, capable of loosening the reins without losing control of the wagon.  They slip comfortably into "Alone", adding their best estimation of a Jordanaires backing croon to the tune as it gradually catches fire: He had a big big heart / But that just kept him hospitalized.

TK is the perfect singer to give voice to these pieces, his delivery breaking with despair or reaching out from desperation as merited.  "Emmanuel" rambles along haphazardly, an ode to the things that we lean on to cope with our days, from coffee and liquid courage to a touch of the stronger stuff.  "Good Stuff" picks up the pace with a goodhearted skiffle: That low lonesome sound / It's the only thing I've found / To pick me up just enough to write something down.  Kingman's songs are less confessional here than on Wannabe, naturally less introspective even as they can mine a similar vein for self-deprecation and a strong turn-of-phrase.

The psychedelic element to their self-styled dream boogie appears most prominently on "Tunnel of a Dream", a trippy travelogue that floats in on an acrid cloud of bells and whistles and expands into Kingman's poetic tale: I sat down as the sun died down in a colorful fit of glory.  "Hard Times" shows the group at their most adventurous, darkening the Felice Brothers' sound with gritty, low-slung guitar.

While Taylor Kingman shares the marquee on Arguably OK with his capable cohorts, he is largely the take-away as a singer and writer.  Like Deer Tick's John J McCauley, Kingman arrives with a recklessness and a charisma that raise the Holy Know-Nothings onto the pedestal as an act to watch.  Where songs like "Devil's Point" or "Lord Why'd Ya Make Me" might too easily dissolve into a teary-beer soundtrack at the hands of lesser artists, there's an undeniable difference here, an act that aims a bit higher: Some nights I might linger / When these eyes bloom with fingers / To trace the ink on the sweet skin of strangers / Safe from the pain of real loving / Safe from the stain of these hands.