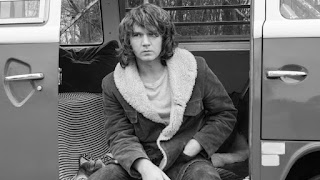 Nominees were recently unveiled for 2019's Honors & Awards.  While I do pay some attention to what happens down at the American Music Association, I'm ultimately following my own thing.  And I'll do my own awards at year's end.  Because we're all about looking over the horizon on R&B, the recognition about which I'm most curious is their Emerging Act of the Year.  Short answer: Yola, 'nuff said.  Anyhow, I'd wager quite a bit that next year's list will include Ian Noe, who is set to release his debut full length, Between the Country next week.

Noe is the most recent artist to emerge from Kentucky, a state gushing with hot and cold running roots performers.  Says the softspoken Noe, "What I was trying to do was write songs that sounded like where I was living."  It's my sense that the Kentucky Tourism Board won't be borrowing any of his songs for their next campaign (though he might hear from the producers of True Detective's upcoming season).  Most of the stories of Between the Country could've come from yellowed newspapers, accounts of trainwrecks and murder sprees of yore. Owing at least in part to producer Dave Cobb, the settings for Noe's work presents these scenarios in a setting that links the sounds of the past and present.

Ian Noe is an admitted disciple of John Prine, a status which earned him the opening spot on the songwriting legend's upcoming European tour.  While he is his own artist, you'll hear Prine's influence on songs like "Irene (Ravin' Bomb)": Irene pulled in at midnight / Lit on smoke and beer / Proudly crawled / To the porch and called / Your favorite child is here.  It's a prodigal daughter story, couched in an arrangement that recalls a certain era of folk music.  Noe's voice is a genuine throwback as well, treated with a bit of an echo throughout the record.

Stories of the past are very present on Between the Country, drawn in stark detail on "Barbara's Song".  Boasting a memorable guitar line from producer Cobb, Noe revisits a 1904 trainwreck, a bridge collapse precipitated by heavy rains.  The singer describes a surrealistic tableau from within the train cars: From the corner of my eye / I saw an angel disguised / As a man with a violin / And he sang us a song / That didn't last very long / So we asked him to sing it again.  Cobb surrounds him with retro reminders of folk gone by, but Noe is never pretending.  You'll hear early Dylan and a young Townes Van Zandt, but you might also catch echos of Jason Molina or Colter Wall in his delivery.

While he's being embraced by the country purist crowd, Ian Noe occupies that shadowy space where Appalachian music carries a deep folk influence, musically and thematically.  Noe's Kentucky is a rough place where desperate people in dire straits make questionable choices.  "Letter to Madeline" is delivered by a holed-up outlaw surrounded by a hundred guns:  Beside the buckshot door I stood still / Wondering how the hell the bastards found me in those hills / And clinging to a letter that I wish I'd mailed.  Like most of producer Dave Cobb's projects, the space on Noe's songs is tastefully filled by a small gathering of capable players.  Especially welcome is singer Savannah Conley, whose backing vocals float through the songs like an avenging angel.

I've only driven through Eastern Kentucky, never even stepping out of the car for as much as a gas refill.  But my sense is that Noe's homeland is a place between time, where old habits are ingrained alongside contemporary issues.  Songs like "Junk Town" emerge from this space, portraying generations of residents who yearn for a new circumstance:  Glory glory / We are awaiting / That sweet someday / When we leave our troubles / And are taken / So far away.  It's a beautiful and evocative chorus worthy of Townes himself, reaching for glory with feet firmly planted in the muck of everyday realities.  Those dreamers appear as well in "If Today Doesn't Do Me In", folks speaking of the awaiting spotlight despite being caged by dead end circumstance:  I can't help but wonder what's left / From every road that dead ends / To those bitter old men / Passing time on the old courthouse steps.   Ian Noe most directly addresses stuff on today's doorstep on "Meth Head", a frank portrait of junkie-as-zombie: That desperate fuckin' meth head ...

Much has already been said about a curious episode, recorded online for posterity, where actor and Aquaman Jason Momoa discovers Noe in a bar and invites him to a Vancouver hotel room.  The songwriter seems awkward and out of place beside the larger-than-life actor, until he sings.  Without Cobb's added echo, with eyes closed and unruly hair curtaining his face, Ian Noe proves himself more than worthy of Momoa's adoration (especially nice is his "Last Stampede", not on this current CD).  On songs like the title track and "Loving You", a couple of Between the Country's most unassuming cuts, that shy but inspired artist peeks through most immediately.  While Ian Noe emerges from Kentucky behind celebrated names like Chris Stapleton and Sturgill Simpson and Tyler Childers, there is a hope that he will never stray from that awkward young man engulfed by the lights and hubbub of the Vancouver suite.

We've got about another month before the official mid-point of 2019.  Rest assured we'll take a moment to pull together a reminder of our favorite CDs of the past six months.  For this week, we've added new albums to A Routes & Branches Guide To Feeding Your Monster from Shreveport's soulful Seratones.  Spirit Family Reunion announced their first full-length record in more than four years, Ride Free, due in August.  Joseph Huber's Moondog will likely land in July, around the same time as Matt Harlan's Best Beasts.  More immediately, here's your ROUTES-cast for the week:

Only heard this album the other week but already in love with it. Dark themes and definite Prine/Dylan influences but Noe has the makings of a great artist.