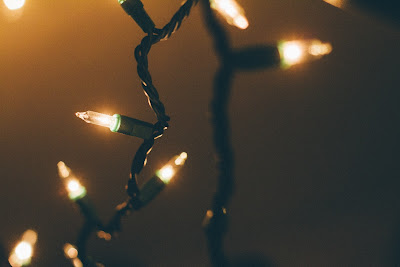 I was a lucky kid when it came to Christmas.  Every year, the family would select the most sprawling, shapeless Oregon fir for our tree.  After we festooned the beast with ornaments, my mother would spend a couple days hanging tinsel, strand by strand until the thing shone like a star.  Wider than it was tall, the tree held court over its own ecosystem in the corner of our living room, gradually attracting carefully wrapped presents around its base until they overflowed and had to be piled in front of the fireplace on Christmas morning.  Even if we got an early start, unwrapping could last well until the afternoon, with my mother always last to open her gifts.  Damn straight my brothers and I were spoiled.

Even in the midst of a tsunami of tinsel, there were still moments of solemnity, silent nights to offset silver bells.  I credit at least some of that to evenings spent in a living room lit only by tree lights reflected off tinsel, playing LPs by Barbara Streisand, Neil Diamond, Ray Conniff Singers and Andy Williams.  In the ensuing years, when I've been able to harness that spirit it was often because of music.  Sure, Paul Anka and Kingston Trio were replaced by Phil Spector and "Fairytale of New York", but it hasn't been Christmas until we've dug into our crate of hymns, carols and songs about snow.

Which is why you'll find holiday music on our blog about this time every year.  For me, it's about stirring that spirit, capturing what can be an increasingly elusive thing.  It's about the peace that might be found above all this bustle.  There can be a lot of stress and resentment surrounding the holidays, but for me it's always been about mining the days for moments of meaning and space for reflection.  Of course, since it's R&B we're still talking about music that matters.  Even through the holidays when new music can be sparse, we never stray from the mission that guides us during the unholiday months.

So during the week(s) to come, you'll enjoy new tracks in the snow from favorites like Hiss Golden Messenger and Molly Burch.  You'll stare longingly into your late night hot chocolate to the tune of Samantha Crain and Los Lobos.  And perhaps you'll gather beneath the still bright star above the stable beside Ass Ponys and Fruit Bats.  And if it kindles something small and warm in your heart, then we've done our work. 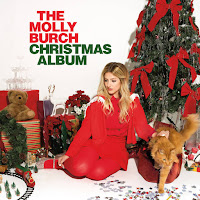 For my dollars, there's not a warmer seasonal offering than A Molly Burch Christmas Album.  As I've written several times, our best Christmas records are those that are also really good albums, period.  Those classics tend to blend a few strong originals with thoughtful passes through seasonal classics.  From Austin, Burch has brought us a pair of recent albums of dreamy indie folk, melancholy originals with a bit of a wink and a healthy layer of retro trappings. That's just what you get on her holiday project, albeit with more uplift-per-groove than on those everyday collections.

Yes, you'll find your red 'n green standards here.  "I'll Be Home For Christmas" is a classically pretty reading, and she's backed by a host of kids on "Have Yourself a Merry Little Christmas".  Burch has some fun during her run through George Michael's contemporary standard "Last Christmas", featuring campy banter with actor and comedian John Early.  But the spirit of Christmas Album is in Burch's non-standard array of cover songs.

By any measure, Ella Fitzgerald's Swinging Christmas is a perennial go-to for purveyors of fine holiday records.  Molly Burch delivers a gorgeous reading of that classic's "Secret of Christmas", her voice beautiful alongside the solo harp.  "What the Lonely Do At Christmas" comes courtesy of The Emotions, a jazz 'n soul stunner whose melancholy rings consistent with much of the collection: The silent night / I know it's gonna be joy to the world / But it's gonna be sad for me.

Famously sung by Dolly Parton for the Best Little Whorehouse in Texas, Burch imbues "Hard Candy Christmas" with a deep feeling absent from most of the umpteen covers over the years.  The closing refrain finds the singer repeating Oh I'll be fine, even after admitting that she's barely getting through tomorrow.  Very few will recall "Snowqueen of Texas" from the Mamas & the Papas, brought back to light on Burch's cool country take.  Perhaps a more palatable alternative to "Baby It's Cold Outside", Cynthia Weil and Barry Mann's "Coldest Night of the Year" is probably best recognized for Bruce Cockburn's version.  Burch's duet with Jesse Woods owes more to a lesser known recording by Vashti Bunyan.  And no heart will be left unstirred in the wake of her take on ABBA's "Happy New Year", a song that leaves the listener wondering What lies waiting down the line / In the end of '89 ...

Molly Burch handles each of these with an admirable balance of cheer and moodiness, her voice a wonderful vehicle for both.  She adds a pair of stylish originals to the sessions, capped by the sweetly stinging "New Year Love":  I spent Christmas alone this year / And I want that to be the last time.  With lyrics like that, A Molly Burch Christmas Album probably won't be your first choice to soundtrack opening presents on a bleary-eyed Christmas morning.  But our holidays tend to be characterized by long stretches of solitude, spiced with fleeting moments of togetherness and community cheer.  During those more inwardly-focused times, there might be nothing better this year.


Your Christmas ROUTES-cast, wrapped with a bow, buried beneath tinsel and shrugging off the snow: